For the first time in several years, there are not big changes to large families of endovascular codes to contend with in 2015. There are a few changes and new codes for endovascular procedures that will be outlined in this article. In addition, there are some changes for nonvascular interventional codes that will also be discussed.

The structure of the endovenous ablation family of codes remains unchanged. However, the valuations for these codes will change beginning January 1, 2015. The change in valuation was triggered by identification in screens used by the RUC (Relative Value Scale Update Committee of AMA) to identify services that may no longer be appropriately valued. Codes 36475, 36478, and 36479 are services with Medicare utilization > 10,000/year with > 100% increase in frequency from 2006 to 2011. (Even though 36476 did not meet these criteria, it was included in the review of this family of codes to determine if the assigned RUC values for these codes remained accurate several years after they were initially surveyed.) After specialty societies for physicians providing these services had reviewed the data, new RUC surveys for this family of codes were performed.

Assessment of the data from expert physicians responding to the RUC surveys found that physician time and physician work for each of these services has decreased since the codes were initially developed and valued. This is true for many new therapies and can be attributed in part to development of better tools for providing the service as well as enhancement of physician training/skill as therapies mature and experience broadens.

The data also showed that the site of service for these therapies has shifted since the original RUC survey was done. These services are now predominantly provided in outpatient and freestanding centers rather than hospital facilities. This has led to an increase in the intensity of the work done, as there are no longer hospital facilities to back up potential complications. 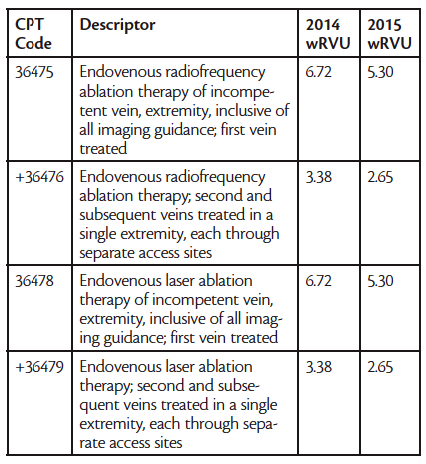 This code will be used to report stenting of these arteries from a femoral approach, including both percutaneous and open femoral artery access. It includes the use of distal embolic protection, when performed; selective catheterization of the vessel(s) treated; all balloon angioplasty performed before, during, or after stent deployment; closure of arteriotomy; and moderate sedation. Diagnostic angiography of the vessel(s) treated, fluoroscopic guidance and all angiography and contrast injections performed to guide the stent placement and to confirm completion of the intervention are included in the work of 37218.

This code is analogous to code 37217 (which was introduced in 2014), the CPT code used to report retrograde stenting of the intrathoracic common carotid and innominate arteries through an open neck incision. The key differentiator between codes 37217 and 37218 is antegrade versus retrograde approach to the lesion. Although the 37218 descriptor includes the option of an open approach, an open cervical access would necessitate a retrograde approach, and 37218 would not describe that service because 37218 specifies use of an antegrade approach.

The descriptors for existing codes 37215, 37216, and 37217 have been updated for 2015. These changes do not change the use of the codes, the work described by the codes, or the valuation of the codes. These changes were made to update the language in the descriptors to be consistent with other current endovascular codes and in particular to use consistent language across the carotid stent family of codes for improved clarity and to reduce potential confusion.

A change to existing CPT codes in 2015 alters the use of codes 37220–37235 and 37236–37237. Codes 37220– 37235 are now specifically to be used for the treatment of lower extremity vascular occlusive disease. This change will affect endovascular therapies in lower extremities provided for nonocclusive disease entities such as aneurysms, pseudoaneurysms, and/or rupture/extravasation. Treatment of nonocclusive lower extremity arterial disease with endovascular stent placement (either covered or noncovered) in the infrainguinal arteries will be reported with arterial vascular stent codes 37236 and 37237 rather than the lower extremity revascularization family of codes 37224–37235. The descriptors for 37236 and 37237 have been modified to reflect this change, and this change is also included in the guidance language in CPT for both sets of codes.

Δ 37236—Transcatheter placement of an intravascular stent(s) (except lower extremity artery(s) for occlusive disease, cervical carotid, extracranial vertebral or intrathoracic carotid, intracranial, or coronary), open or percutaneous, including radiological supervision and interpretation and including all angioplasty within the same vessel, when performed; initial artery
+Δ 37237— each additional artery

Coding for iliac artery interventions will also be affected. Existing codes 37220–37223 will continue to be used for reporting endovascular therapies for occlusive disease. Existing code 34900 will continue to be used to report placement of an endoprosthesis for treatment of nonocclusive diseases (eg, aneurysm, pseudoaneurysm, arteriovenous malformation, trauma). Treatment of iliac artery nonvascular disease with stents that are not endoprostheses will be reported with codes 37236 and 37237.

This change will create questions for reporting therapies when both occlusive and nonocclusive disease are treated in the same vessel or in the same patient encounter. The specialty societies are working on development of consensus instructions for implementation of this coding change.

New codes have been developed for vertebroplasty, vertebral augmentation, and sacroplasty. Changes in the structure of the new codes compared to previous codes include bundling of the surgical procedure with imaging portions of the procedure into single codes, introduction of codes for vertebroplasty performed in the cervical portion of the spine, and elevation of sacral vertebroplasty to Category I CPT codes. These codes all include bone biopsy of the vertebra when performed, moderate sedation, and all imaging necessary to perform the procedure. When procedures are performed at multiple levels, one primary code should be reported, and all additional levels should be reported with add-on code(s). Sacral procedures are reported only once per patient encounter. The Category III codes for sacroplasty (0200T, 0201T) were updated to reflect that sacral vertebroplasty is now reported with a Category I code (22511, 22512), and the Category III codes are now used only to report sacral vertebral augmentation using a balloon or other mechanical device. The Category I codes (22510–22515) are reported once for each vertebral body, regardless of whether unilateral or bilateral injections are performed. The Category III codes for sacral augmentation are structured to allow reporting of unilateral injection with 0200T and bilateral injection with 0201T. Codes 72291 and 72292 (fluoroscopic and CT guidance for vertebroplasty/ vertebral augmentation/sacroplasty) were deleted. No code is available to report vertebral augmentation with balloon or other mechanical device in the cervical spine. Unlisted code for spine procedures, 22899, would be used to report this service.

Katharine L. Krol, MD, FSIR, FACR, is an interventional radiologist and has recently retired from active clinical practice. She has stated that she has no financial interests related to this article. Dr. Krol may be reached at (317) 595-9413.

The impact that current CMS reimbursement has had on the settings for dialysis access care and a look ahead at the forthcoming rate decisions.

An overview of changes to interventional CPT coding that you need to know for practicing in 2018.

An update on how to differentiate and manage two potentially devastating diagnoses.

An overview of branched arch devices on the horizon.

An overview of the InterGraft™ Vascular Anastomotic Connector System and a case report from the first-in-human study.

Without sufficient long-term data on the use of chimney or branched grafts, arch debranching is the preferred treatment modality.