DES and DEB Use in Europe

As devices develop and longer follow-up data become available, one thing is certain: It’s a drug-eluting world, all right.

The femoropopliteal artery is the most common site of disease in patients with peripheral vascular disease and is typically characterized by increased and often aggressive vascular restenosis after endovascular treatments.1 Drug-coated balloons (DCBs) and drug-eluting stents (DES) have emerged as the latest and most promising development in the fight against neointimal hyperplasia in the peripheral arteries.

However, before discussing the base of evidence underpinning the use of DES and DCBs, one needs to understand the rationale and key principles of percutaneous angioplasty and endovascular treatments in general. Each patient requires a customized treatment plan depending on baseline comorbidities, anatomy and morphology of the disease, and above all, clinical symptoms. Intermittent claudication is fundamentally a benign condition that limits lifestyle, contrary to critical limb ischemia, which necessitates more aggressive revascularization to avoid limb loss and is often related to limited life expectancy akin to a malignancy.2 During the last decades, the armamentarium of percutaneous balloon angioplasty has evolved from primitive Dottering catheters to sophisticated miniaturized equipment able to (1) cross the lesion, (2) debulk the plaque, (3) dilate the vessel, (4) scaffold the lumen, and (5) apply antirestenotic drugs. Hence, each individual treatment will employ a series of the aforementioned tasks with the aim to maximize acute luminal gain followed by a durable patency result.

DCBs address only the last task, whereas DES address the tasks of both scaffolding the vessel after balloon angioplasty and drug elution to inhibit restenosis, albeit at the expense of a permanent metal implant. Soon after the failure of the SIROCCO and the STRIDES trials, which employed -olimus agents,3,4 paclitaxel has become the mainstream drug to fight neointimal hyperplasia in the femoral artery. In a recent network meta-analysis of 16 randomized controlled trials comprising > 2,500 patients, we have shown that paclitaxel-coated balloons and paclitaxel-eluting stents offer the best long-term results in the femoropopliteal artery by significantly reducing the incidence of restenosis and target lesion revascularization by approximately 50%.5 The base of evidence supporting DCB currently includes nine randomized trials with > 1,000 patients and 1 to 2 years of follow-up. DES in the femoral artery is supported by an RCT, the ZILVER-PTX trial, with 479 patients and 5 years of follow-up in the latest update.6

On the basis of the previous rationale and evidence, DCBs are best suited for short, noncalcified lesions in patients of younger age who are suffering from lifestyle-limiting claudication with the aim to inhibit vascular restenosis. On the other hand, stents are associated with significantly higher immediate technical success compared to balloon angioplasty.5 Hence, DES are quite suitable for more complex lesions. As a glimpse to the future, bioabsorbable DES that may combine the best of both worlds (ie, scaffold the vessel and inhibit restenosis, but without a permanent implant) are already paving the way from the bench to the clinic.

Currently, adoption of DCBs and DES in Europe is gradually increasing. However, variations of paclitaxel pharmacokinetics, differing results in the magnitude of paclitaxel effectiveness, the need for drug carriers or excipients, and above all, the increased costs associated with these new devices have been a barrier to mainstream use. In Europe in particular, conservative health care models and complicated reimbursement policies within a cost-sensitive economic environment have further impeded the use of paclitaxel stents and balloons in the periphery. Of note, clinical- and cost-effectiveness has been shown for both DCB and DES with the application of budget-impact modeling or probabilistic cost-benefit analyses.7,8 In brief, the significant reduction of repeat angioplasty events (TLR) is expected to materialize in significant cost savings for the health care providers in the future despite the higher up front investment in patient care (price premium of drug balloons and stents). Whatever the future holds, it is definitely a drug-eluting one. 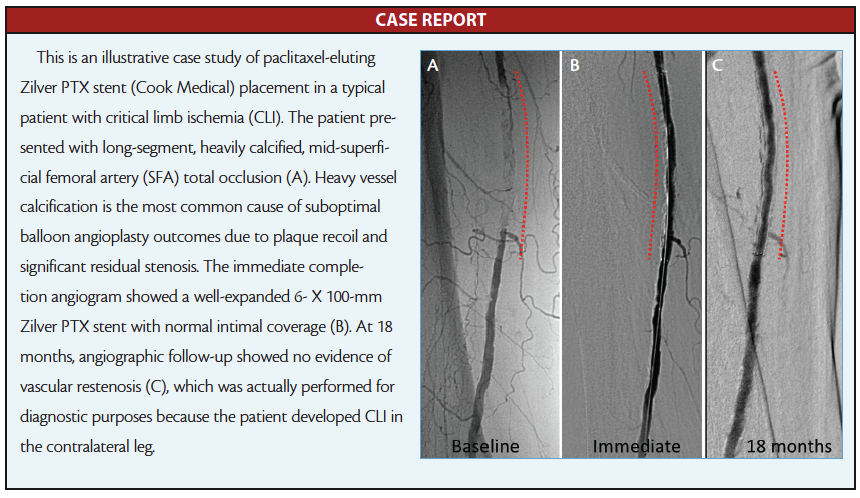 Konstantinos Katsanos, MSc, MD, PhD, EBIR, is a Consultant Vascular & Interventional Radiologist, Guy’s and St. Thomas’ Hospitals, NHS Foundation Trust, Department of Imaging Sciences & Biomedical Engineering, King’s College, London. He stated that over the last 2 years, he has been a proctor for Medtronic-Invatec and has received honoraria for lectures by Cook and Gore. Dr. Katsanos may be reached at Konstantinos.Katsanos@gstt.nhs.uk.

Dr. Katsanos was not paid for writing this article.

An update on how to differentiate and manage two potentially devastating diagnoses.

An overview of branched arch devices on the horizon.

An overview of the InterGraft™ Vascular Anastomotic Connector System and a case report from the first-in-human study.

Without sufficient long-term data on the use of chimney or branched grafts, arch debranching is the preferred treatment modality.