More than 81 million Americans are affected by some form of cardiovascular disease.1,2 Peripheral artery disease (PAD) is a growing public health concern in the United States and affects 8 million Americans.2,3 Left untreated, PAD can result in increasingly morbid outcomes.4 Endovascular revascularization of occluded arteries is the ideal course of treatment. Placement of stents is the standard course of treatment for occluded coronary arteries; however, stent placement presents unique challenges when used in the peripheral arteries due to the dynamic stresses and motion of the arteries. Furthermore, in-stent restenosis (ISR) due to neointimal hyperplasia after stent implantation has plagued the field and has emerged as the Achilles’ heel of this era of vascular interventions.

Although there have been promising developments in treating ISR, data supporting these novel therapies have lagged behind. This article details the results from three randomized trials comparing different therapies to standard percutaneous transluminal angioplasty (PTA) for ISR: the FAIR trial, which looked at drug-coated balloons (DCBs); the EXCITE ISR trial, which studied excimer laser atherectomy (ELA); and the RELINE trial, which analyzed the use of the GORE® VIABAHN® Endoprosthesis.

The artery can be divided into three distinct layers: the intima consisting of endothelial cells, the media made up of smooth muscle cells, and the adventitia made up of collagen fibers and fibroblasts. Balloon angioplasty and stenting of an artery induces a localized inflammatory response, which precipitates neointimal proliferation and tissue growth.6,7 Peripheral arteries undulate and are subjected to the triplanar intermittent stresses of compression, flexion, and torsion. The placement of a stent inhibits the artery’s natural movement. Furthermore, current nitinol stent systems are oversized for use in peripheral arteries and result in chronic outward radial force that causes long-term inflammation. Thus, the placement of the stent results in mechanical trauma to the walls of the artery, which in turn triggers an inflammatory response. The basement membrane of the media is fractured, resulting in a phenotypic switch of the smooth muscle cells from quiescent to proliferative. The mechanical trauma results in inflammation in the adventitia, which acts as positive feedback for the phenotypic switch of the smooth muscle cells of the media and also results in further proliferation of fibrotic cells. The proliferation and fibrosis in these two layers ultimately manifests in the migration of this overgrowth into the media, resulting in neointimal hyperplasia.8,9

Stent placement in peripheral arteries is associated with a high rate of ISR; it has been reported to occur in up to 40% of femoropopliteal lesions treated with bare-metal stents within 1 year of treatment.11-13 The most common course of treatment after ISR is PTA; however, nearly 65% of patients will return with ISR following this retreatment within 2 years. Recently, the VIASTAR trial showed a 1-year ISR rate of 45% and a 2-year rate of 58.8% in bare-metal stents and 36.9% at 2 years with the GORE VIABAHN Device.14

A classification scheme for management of ISR lesions was recently proposed by Tosaka et al.15 The lesions are classified by visual estimate on angiography (Figure 1): 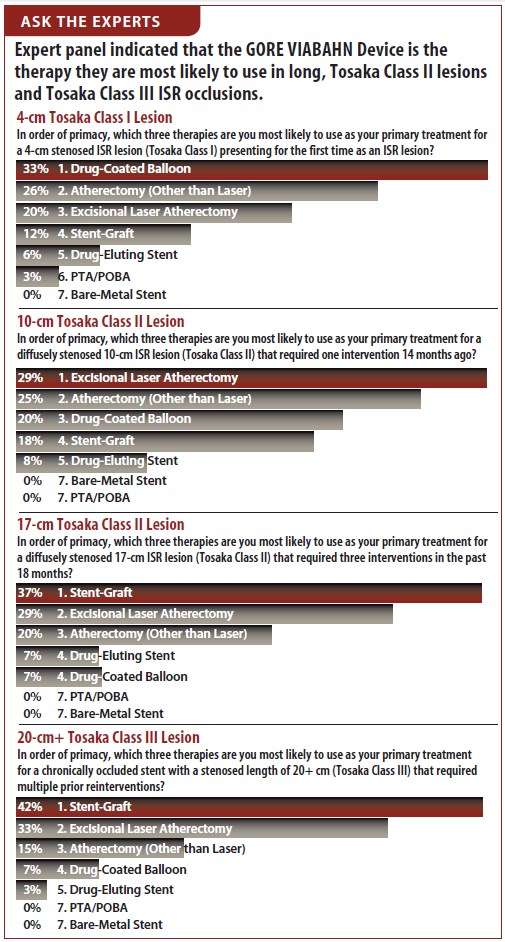 Treatment options for ISR include PTA, cutting or scoring balloons, atherectomy devices, covered stent systems, DCBs, drug-eluting stents, and/or direct drug delivery. In an initial study conducted by Dick et al comparing the rates of binary ISR after using either conventional PTA or cutting-balloon angioplasty, it was found that both treatments were ineffective and were associated with a 6-month restenosis rate of 73%.17 Most reports of ISR treatment have been single-center, observational studies with limited follow-up. However, there have been three recent multicenter, prospective, randomized trials comparing therapeutic options for the treatment of ISR: the EXCITE ISR trial, the FAIR trial, and the RELINE trial.

The EXCITE ISR trial was a multicenter, randomized study that aimed to compare the efficacy of ELA and PTA versus conventional PTA alone in treating femoropopliteal ISR. The study was the first randomized trial to demonstrate the benefits of utilizing atherectomy in combination with PTA in the lower extremities.18 There were 250 patients randomized 2:1 between 2011 and 2014 at 40 sites. The primary efficacy endpoint of the study was determined by freedom from clinically driven TLR at 6 months. This included binary restenosis (unspecified peak systolic velocity ratio), return of clinical symptoms, and deteriorated ankle-brachial index or Rutherford classification.

The study included real-world, long ISR lesions averaging 19.6 cm in the ELA+PTA arm and 19.3 cm in the PTA-alone arm. The use of ELA resulted in a significantly higher procedural success rate of 93.5% compared with 82.7% for PTA alone (P = 0.03). The use of ELA was also associated with a significantly higher rate of freedom from major adverse events compared with PTA alone (94.2% vs 79.2%, respectively; intent-to-treat, P < 0.001). Lastly, the ELA+PTA arm demonstrated both a significantly higher patency rate (approximately 40% for ELA+PTA vs 20% for PTA) at 12 months and a higher rate of freedom from TLR after 12 months (approximately 47% for ELA+PTA vs 28% for PTA).

The FAIR trial was a randomized, controlled trial aimed at assessing the efficacy of DCB angioplasty to standard PTA in treating ISR of the superficial femoral artery. There were 119 patients randomized 1:1 at five sites. The primary endpoint of the trial was the 6-month binary restenosis rate (> 50%) as evidenced by duplex ultrasound with a peak systolic velocity ratio > 2.4. The secondary endpoints included technical success of access and treatment resulting in < 50% residual stenosis. Additionally, the study aimed to measure 12-month recurrent ISR of > 50% and freedom from TLR at 6 months and 12 months. Overall, the FAIR trial looked at shorter lesions, averaging approximately 8.2 cm in length in both study arms. At 12 months, there was a significant improvement in primary patency in the DCB group (DCB, 70.5% vs standard PTA, 38.5%; P = 0.004). Freedom from clinically driven TLR also increased in the DCB group (DCB, 90.8% vs standard PTA, 52.6%; P < 0.0001).19,20 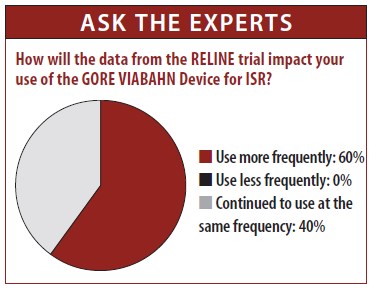 The 12-month primary patency according to intent-to-treat, per-protocol, and optimal PTA analyses all demonstrated a highly statistically significant difference between the two arms of the study (Table 1). The percentage of patients requiring TLR up to 12 months was three times lower for the GORE VIABAHN Device arm (Figure 3 and Table 2).

This prospective, randomized trial demonstrated superiority of the GORE VIABAHN Device as compared with PTA in the treatment of restenotic nitinol stents in the superficial femoral artery, with superior primary patency at 12 months, and an approximately threefold reduction in the number of patients requiring a TLR rate at 12 months. This trial also demonstrated a low incidence of serious device-related adverse events in both arms of the study and an absence of fracture of the GORE VIABAHN Device in this application.

The RELINE clinical study demonstrated superiority of the GORE VIABAHN Device as compared with PTA in the treatment of femoropopliteal ISR lesions. The only other prospective, multicenter, randomized trials evaluating other treatments compared with PTA were the EXCITE-ISR trial of ELA and the FAIR trial of paclitaxel DCBs.18,20 Although comparisons of these trials are complicated by the fact that the patient populations and average lesion lengths varied, it appears the application of the GORE VIABAHN Device is associated with a very favorable 12-month primary patency rate and freedom from need of repeat intervention (Table 3).

Tosaka et al established that lesion length and/or the presence of a stent occlusion are predictors of patency and the need for subsequent reintervention in ISR lesions undergoing PTA.14

ELA enhances the outcomes after treatment of ISR lesions with DCBs.28 Whether ELA (or other forms of atherectomy) also enhances the performance of the GORE VIABAHN Device in ISR lesions is not established, as the SALVAGE trial was a single-arm trial.

ISR continues to be a prevalent problem in the field of peripheral endovascular interventions. As the impact of PAD on health care resources increases in the United States, the need for devices that can answer the problem of restenosis is critical. The data landscape of randomized, controlled trials is scant. The FAIR trial, EXCITE ISR trial, and RELINE trial have demonstrated the benefit of new and innovative strategies to tackle this clinical challenge.

Both the EXCITE-ISR trial and the RELINE trial studied similar “real-world” long lesion lengths of over 17 cm as compared with the short mean lesion length of 8.2 cm in the FAIR trial (Figure 4). Despite being studied in lesions over twice as long as in the FAIR trial, the primary patency at 12 months was numerically greater for the GORE VIABAHN Device in the RELINE trial. In contrast to the relatively poor performance of ELA in long ISR lesions, the GORE VIABAHN Device demonstrated exceptional patency in these lesions.

In summary, the limited number of multicenter, prospective, randomized ISR trials highlight the remarkable performance of the GORE VIABAHN Device in a patient population where other therapies either are not studied or underperform.

George L. Adams, MD, MHS, FACC, FSCAI, is with Rex Hospital, University of North Carolina Health System in Raleigh, North Carolina. He has disclosed that he is a consultant for Gore & Associates, Medtronic, and Spectranetics.

Robert M. Bersin, MD, FACC, FSCAI, is Medical Director of Endovascular Services and Medical Director of Structural Heart Services at Swedish Medical Center in Seattle, Washington. He has disclosed that he is a consultant to Medtronic, Spectranetics Corporation, and Gore & Associates. Dr. Bersin may be reached at robert.bersin@swedish.org.

Jon C. George, MD, FACC, FSCAI, is with the Division of Interventional Cardiology and Endovascular Medicine, Deborah Heart and Lung Center in Browns Mills, New Jersey. He has disclosed that he is a consultant for Abbott Vascular, Boston Scientific Corporation, Cook Medical, Gore & Associates, Medtronic, and Spectranetics Corporation. Dr. George may be reached at jcgeorgemd@hotmail.com.

Vinayak Subramanian, BS, is with the Department of Biomedical Engineering, North Carolina State University in Raleigh, North Carolina. He has stated that he has no financial interests related to this article.

The rationale for investigating the use of paclitaxel-coated balloons in vascular access.

Clearing up use of the new codes for vertebroplasty and vertebral augmentation.

Dialysis Catheter Placement and Selection Based on the Right Atrium

How to choose the right catheter tip for optimal performance in different anatomic right atria configurations.

Renal Denervation: What Is on the Horizon?

A look at the background of renal denervation studies and the future directions of this therapy for patients with hypertension.