Optimal Technique for Use of the GORE® VIABAHN® Endoprosthesis

The GORE VIABAHN Device has been used for percutaneous management of long, complex femoropopliteal occlusive disease with favorable results, as demonstrated in numerous clinical trials. Factors favoring this approach include a length-independent restenosis rate, outstanding flexibility, and a reported fracture rate of < 0.015%.* The GORE VIABAHN Device demonstrated significantly higher primary patency over bare-metal stents in the randomized VIASTAR trial (78% vs 54% at 12 months; P = 0.009, per-protocol analysis)1 and has even shown long-term equivalence to expanded polytetrafluoroethylene (ePTFE) bypass graft surgery.2 Recent trials such as the Gore VIPER clinical study have demonstrated exceptional outcomes using the GORE VIABAHN Device with CBAS® Heparin Surface and have shed light on factors that optimize outcomes.

Translating the results seen in clinical trials to clinical practice may be more challenging for stent-grafts than for bare-metal stents. Technical considerations are of greater importance and significantly impact procedural outcomes. The predominant failure mechanism for the GORE VIABAHN Device is edge restenosis, which, if left untreated, can lead to stent-graft thrombosis resulting in total occlusion. Conversely, bare-metal stents more commonly develop diffuse restenosis due to neointimal hyperplasia, which ultimately may result in stent occlusion as well (Figure 1).

Despite the device improvements noted in this supplement’s article by Dr. Becker, “Innovation Fueling Evolution: Two Decades of the GORE® VIABAHN® Endoprosthesis” (see page 15), the most critical elements of successful GORE VIABAHN Device usage remain related to technique. Perhaps the most important lesson from clinical trials relates to proper sizing of the GORE VIABAHN Device. Although it is common in clinical practice to oversize bare-metal self-expanding stents by 1 to 2 mm, it is clear that oversizing GORE VIABAHN Devices by more than 20% of the vessel diameter leads to significantly lower patency rates (Figure 2).3 The operator should also pay attention to the distal vessel, where the vessel diameter is often smaller than in the proximal vessel. For long segments of disease requiring overlapping stents, the GORE VIABAHN Devices may be “telescoped,” perhaps utilizing a 5-mm-diameter stent-graft followed by deployment of a 6-mm device more proximally in overlapping fashion. The resulting “tapered” stent-graft will match both the proximal and distal vessel diameters appropriately without oversizing distally or undersizing proximally. When utilizing the GORE VIABAHN Device for treatment of in-stent restenosis, the stent-graft should be sized based on the diameter of the normal vessel proximal and distal to the bare-metal stent, not based on the size of the implanted stent.

It is also essential to treat all of the disease with the GORE VIABAHN Device, from “normal to normal.” As a corollary to this axiom, if the device is to be deployed in the proximal superficial femoral artery (SFA), it is preferable to cover all the way back to the true ostium of the SFA, which can be clearly identified using an ipsilateral angulated view of 30° to 45°. Importantly, it is sometimes necessary to cover a collateral to the distal SFA in order to stent from “normal to normal.” Although some operators are reluctant to cover collaterals, the recent Gore VIPER clinical study demonstrated that the risk of acute limb ischemia from GORE VIABAHN Device thrombosis is rare (1%),3 and the VIASTAR randomized trial demonstrated no significant difference in the incidence of acute limb ischemia with the GORE VIABAHN Device versus bare-metal stents (P = 1.0).1 Failure to stent distally enough to reach a normal segment due to fear of covering a collateral is an avoidable technical mistake that may compromise long-term patency.

As it is commonly necessary to overlap GORE VIABAHN stents due to the long lesion lengths that are often treated, care should be taken to overlap the stents by at least 1 cm. It is also important to postdilate the GORE VIABAHN Device(s) using moderate- to high-pressure balloon angioplasty inflations. When postdilating, the balloon should not be allowed to extend past the edge of the GORE VIABAHN Device. Clear knowledge of the angioplasty balloon’s shoulders and their relationship to the balloon’s radiopaque markers is essential. If uncertain, it is best to dilate 1 cm inside the edge of the GORE VIABAHN Device initially to visualize those factors before dilating more precisely at the edge. Dilating outside the stent-graft edges may lead to edge dissections and/or an increased restenosis rate typical of balloon angioplasty and is to be avoided.

1. Avoid excessive oversizing (> 20%)
2. Ensure adequate inflow and outflow
3. Treat all of the disease (stent “normal to normal”)
4. Regular duplex ultrasonography follow-up
5. Prescribe appropriate antiplatelet therapy
6. Postdilate
7. Do not use PTA outside of the device
8. Treat progressing disease
9. Place device at the SFA origin if proximal SFA disease is present
10. Overlap devices by at least 1 cm

Ideally, there should be at least one patent infrapopliteal run-off vessel free of significant stenosis. If necessary, intervention may be required to optimize the distal run-off in order to enhance GORE VIABAHN Device patency. Similarly, if there is significant inflow (iliac) disease, this should be treated before deploying GORE VIABAHN Devices in the femoropopliteal circulation; iliac intervention during the same procedure is reasonable.

Postprocedure management is critical for long-term success. Although some investigators have recommended dual-antiplatelet therapy (DAPT) (typically aspirin and clopidogrel) for as little as 6 weeks, most experienced operators have found results to be optimal with long-term, if not indefinite, antiplatelet therapy. At a minimum, 1 year of DAPT should be utilized if possible.

Unlike bare-metal stent restenosis, which often is diffuse, GORE VIABAHN Device edge restenosis is focal and is often asymptomatic and associated with a normal or nearly normal ankle-brachial index. Nonetheless, it is necessary to treat hemodynamically significant edge restenosis to avoid slow flow and the inevitable thrombosis. A peak systolic velocity of ≥ 250 to 300 cm/sec or a PSVR > 2.5 should prompt interventional management of edge restenosis, typically with balloon angioplasty and an “extension” using a 5-cm-long stent of the same diameter as the prior stent-graft. Many clinicians prefer a cutting or scoring balloon before placing the GORE VIABAHN Device extension, although there are no data to support this approach. Finally, if new disease develops proximal or distal to the treated segment, it should be aggressively treated using similar criteria for edge restenosis. 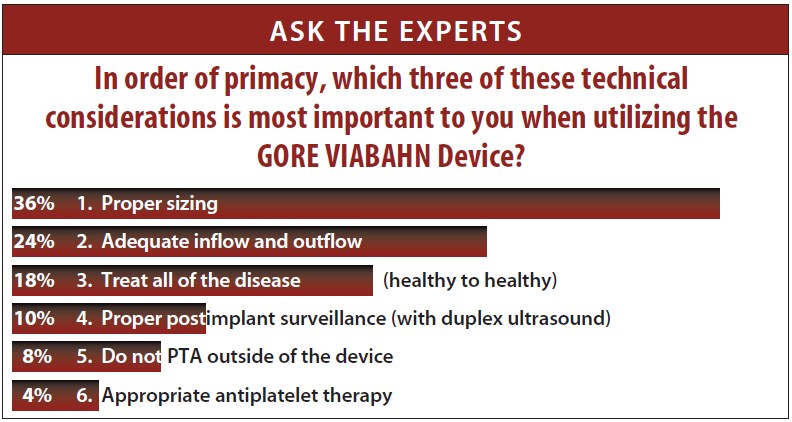 In rare instances, patients may develop GORE VIABAHN Device thrombosis. The majority of these patients present with symptoms that are similar (if not less severe) to their initial presentation, rather than as acute limb ischemia.5 For patients with acute limb ischemia, antegrade flow must be restored rapidly, which is possible using rheolytic thrombectomy devices such as the AngioJet™ Thrombectomy System (Boston Scientific Corporation), particularly when used with a power-pulse spray technique with thrombolytic therapy (eg, tissue plasminogen activator). It may be helpful to place a distal protection filter to reduce the risk of distal embolization.

For patients with recurrent claudication, flow may be restored using thrombolysis. Ultrasound-assisted thrombolysis utilizing the EkoSonic® System (Ekos Corporation, a BTG International group company) provides a quick, simple approach. The thrombotic occlusion is crossed, and the EKOS catheter is placed. Thrombolytic therapy is administered for 8 to 24 hours, which typically resolves all of the thrombus without any embolization. The patient can then be returned to the laboratory for treatment of the residual edge stenosis that may be present at the proximal edge, distal edge, or occasionally, at both edges.

Barry S. Weinstock, MD, FACC, is with Florida Heart & Vascular Center in Leesburg, Florida. He has disclosed that he is a consultant and on the speakers’ bureau for Gore & Associates. Dr. Weinstock may be reached at (407) 948-0535; bweinstock@me.com.

The rationale for investigating the use of paclitaxel-coated balloons in vascular access.

Clearing up use of the new codes for vertebroplasty and vertebral augmentation.

Dialysis Catheter Placement and Selection Based on the Right Atrium

How to choose the right catheter tip for optimal performance in different anatomic right atria configurations.

Renal Denervation: What Is on the Horizon?

A look at the background of renal denervation studies and the future directions of this therapy for patients with hypertension.