This was a relatively quiet year for coding changes for endovascular and interventional procedures. This article outlines the changes that took effect January 1, 2019. 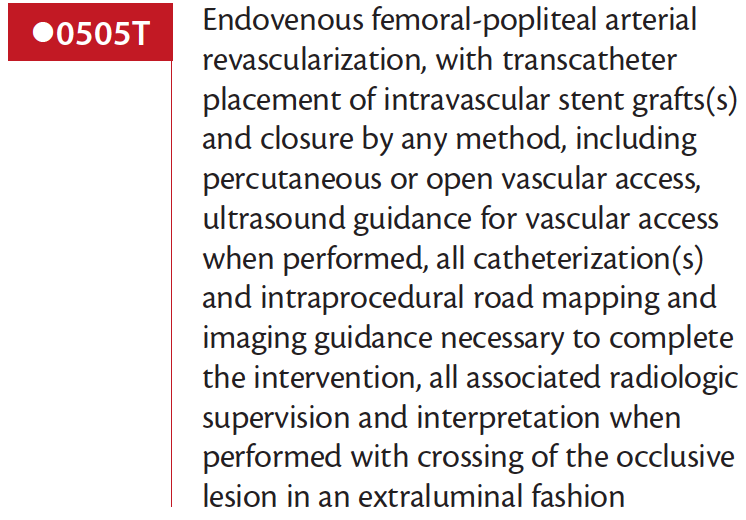 A new category III code was created to allow reporting of a procedure that is currently being studied in a clinical trial. This procedure typically uses a proprietary device but could be performed with available nontrial devices. The procedure would be reported with code 0505T, regardless of whether it is performed as part of a clinical trial. This service is typically performed to bypass an occlusion/stenosis, specifically in the femoral or femoropopliteal arterial segment, and involves the creation of an extraluminal endovenous/endovascular arterial bypass by the placement of covered stents. The adjacent femoropopliteal vein is used as a pathway for the endovascular bypass, and the service requires cannulation of the femoral artery in an antegrade direction plus cannulation of the vein from a distal access. A wire is passed from the artery above the occlusion into the adjacent vein, typically using a crossing device, with reentry into the artery below the occlusion. Covered stents are placed to create an endograft bypass around the occlusion. This service requires that the endograft uses the vein as its pathway. This code would not be used if an extraluminal channel is created that is not intravenous. For instance, it is not appropriate to use this code for an arterial subintimal recanalization.

This code encompasses all aspects of the service, including ultrasound (US) guidance for puncture of the arterial and/or venous access sites. US guidance was included because it is likely that it will almost always be used, and 76937 (US guidance for vessel access) may not be separately reported. All catheterizations of the arteries and veins, imaging guidance, road mapping, intraprocedural angiography, completion angiography, cannulation of the artery from the vein and the vein from the artery (including use of a crossing device), balloon angioplasty, and stenting are included. This code is intended to be an all-inclusive code for this service. 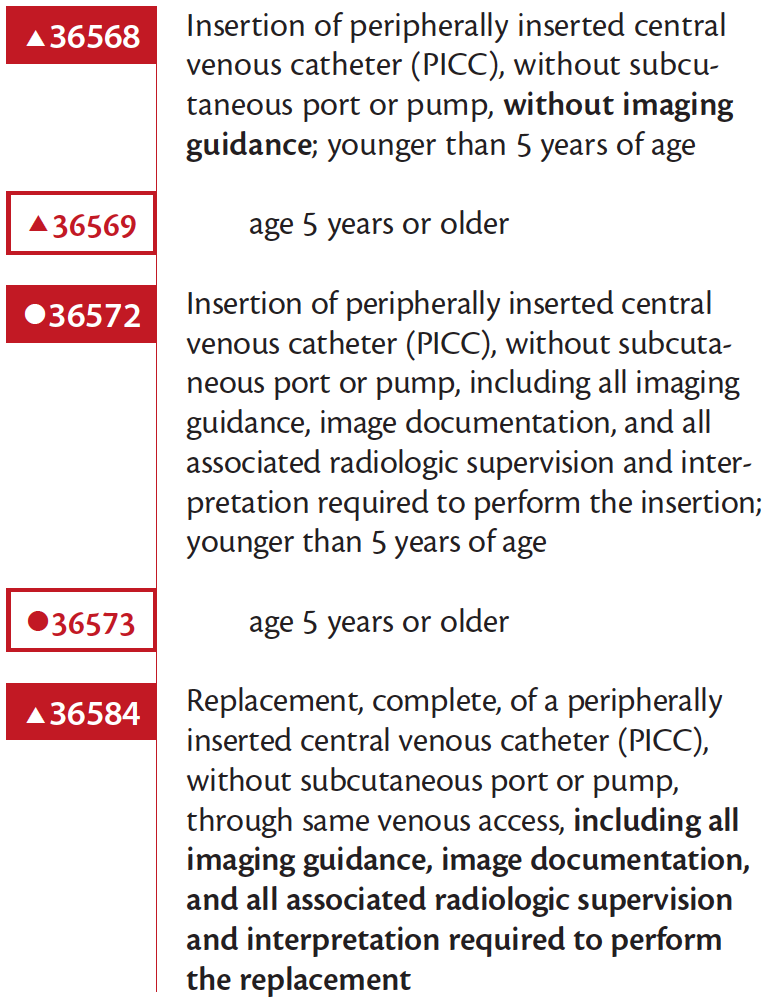 Venography performed through the same venous access is bundled with codes 36572, 36573, and 36584 and may not be separately reported. CPT also specifies that an image from all guidance modalities used should be stored in the patient’s permanent record. In addition, US guidance requires documentation of assessment of the access vein for patency and real-time visualization of needle entry into the vein. 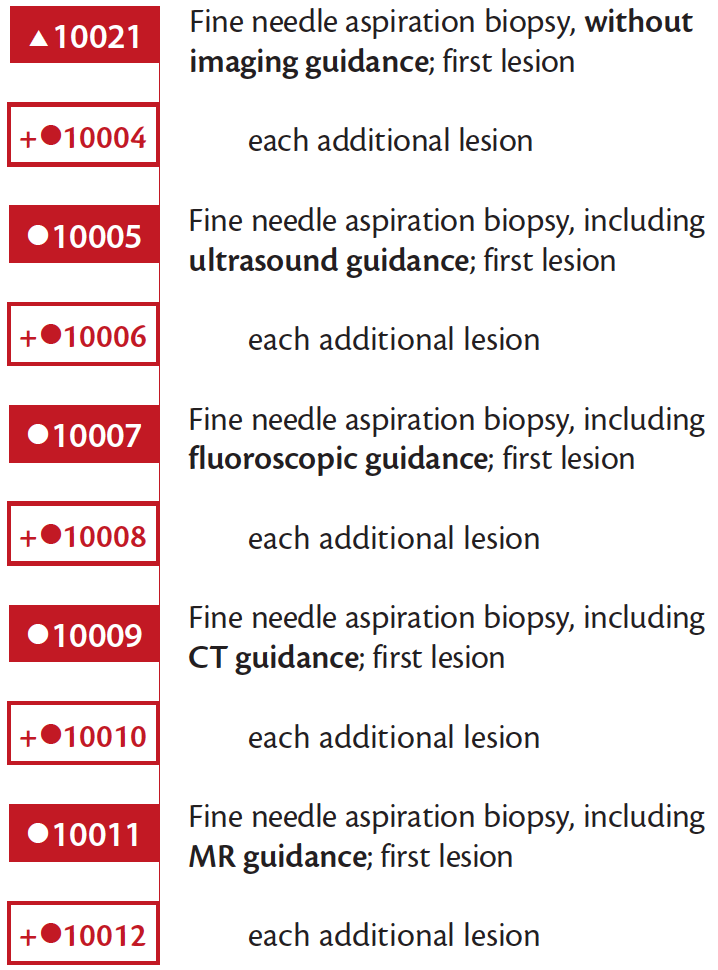 Example 3. A right lung FNA is performed using CT guidance, and a liver lesion is sampled with FNA using US guidance.

Example 4. FNA biopsy of a lung lesion is performed using fluoroscopic guidance for a lung lesion. A core biopsy is then taken of the same lung nodule using CT guidance.

Example 6. FNA biopsy is performed using US guidance for a liver lesion. A separate liver lesion is biopsied using a core technique, also with US guidance. 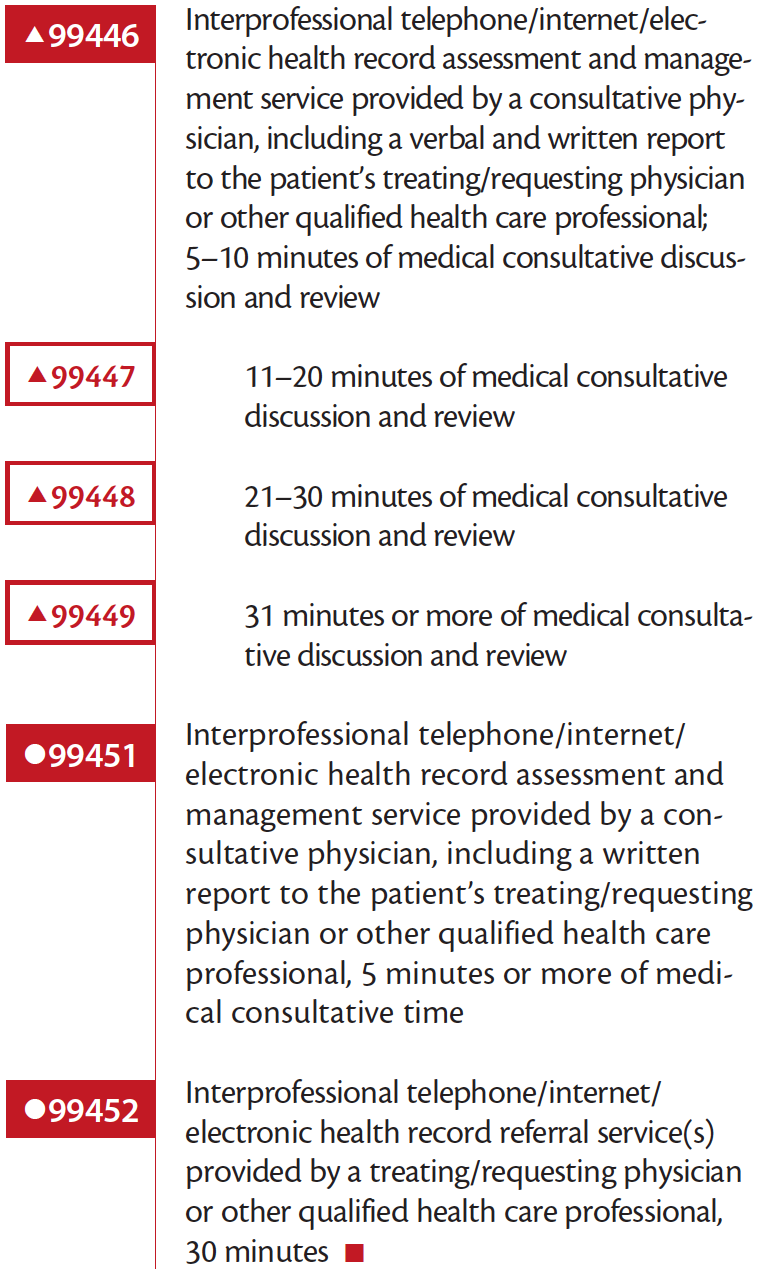 For the consulting physician, these codes are intended to include assessment and management services in which the referring physician requests the opinion and/or treatment advice from another physician to help with diagnosis and/or management of a patient that the consulting physician does not see face to face. These codes are reported based on total time spent. More than 50% of the total time should be spent providing verbal and/or internet communication, with the referring doctor providing the assessment and management portions of the service. Time spent reviewing records (ie, imaging/lab results, medication records, medical records) is included in the cumulative time. However, if more than 50% of the time is spent reviewing records, the service does not qualify as a medical consult, and these codes would not be reported. Codes 99446–99449 require both written and verbal reports to the referring physician. Code 99451 requires only a written report, which may be provided in the electronic health record, secure portal, letter, etc. Services requiring < 5 minutes are not reported.

The Centers for Medicare & Medicaid Services has expanded access to care using telecommunications by announcing coverage of these codes for 2019. CPT has additional guidelines regarding specifics for use of these codes.

If you have any questions or topics you would like Dr. Krol to address in a future column, please contact us at evteditorial@bmctoday.com.

A look at the eversion approach to CEA, including technical tips, available data, and how to decide when this might be the best option.

Iliac Intervention and Management of the Challenging Bifurcation and Distal EIA

An overview of proper stent selection and technique for treating aortoiliac occlusive disease.

CLI: When Is Enough, Enough?