Limb revascularization is considered the cornerstone of treatment for patients with critical limb ischemia (CLI). Nevertheless, there is still a lack of evidence in terms of the optimal treatment strategy in CLI because of the involvement of different disciplines without interdisciplinary treatment guidelines, the lack of available high-level evidence, and the rapid evolution of therapies in the endovascular era.1,2 The current literature suggests that there is no difference between endovascular and open surgical revascularization.3 However, it is clear that there is a paucity of data to guide clinical decision-making, in particular as it pertains to specific patient subgroups.

To inform this debate, we assessed the current practice in Germany in the framework of a multicenter prospective registry of first-line treatment strategies in patients with CLI through the CRITISCH registry. In particular, we analyzed physician preference and compared the respective outcomes of different first-line therapies.

CRITISCH (NCT01877252) is a national, prospective, interdisciplinary, multicenter registry conducted at 27 vascular centers in Germany.4 The aim of the registry was to evaluate the current practice of all available treatment options for patients with CLI, including conservative treatment, and it was designed to prove the noninferiority of endovascular therapy compared to bypass grafting for the endpoint of amputation-free survival (AFS).4 The single inclusion criterion of the study was the presence of new-onset CLI, defined as an ankle-brachial index < 0.40, ischemic rest pain, or both, with or without tissue loss in the presence of peripheral artery disease (Rutherford class 4–6/Fontaine class III or IV) lasting > 2 weeks. Importantly, all centers were instructed to recruit patients consecutively. The primary endpoint of CRITISCH was AFS, defined as time until an above-ankle amputation of the index limb, death (any cause), or both. The applied treatment was left at the discretion of the treating physician, without any restriction concerning the selected treatment option.

The different first-line treatment strategies were categorized into five groups:

• Group I included patients who underwent all types of endovascular procedures

Between January 2013 and September 2014, 1,200 patients were enrolled consecutively. Endovascular procedures were performed as the primary treatment option in most patients (54%), whereas surgical bypass, common/deep femoral artery revascularization, conservative treatment, and primary amputation were performed in 284 (23.7%), 126 (10.5%), 118 (9.8%), and 30 (2.5%) patients, respectively. Main risk factors for amputation and/or death during the in-hospital stay were congestive heart disease (odds ratio [OR], 2.96), acute coronary syndrome within the 6 months prior to enrollment (OR, 3.67), end-stage renal disease (ESRD; OR, 3.31), stages 3 and 4 chronic kidney disease (CKD; OR, 6.34), and the performance of bypass grafting (OR, 3.34).4 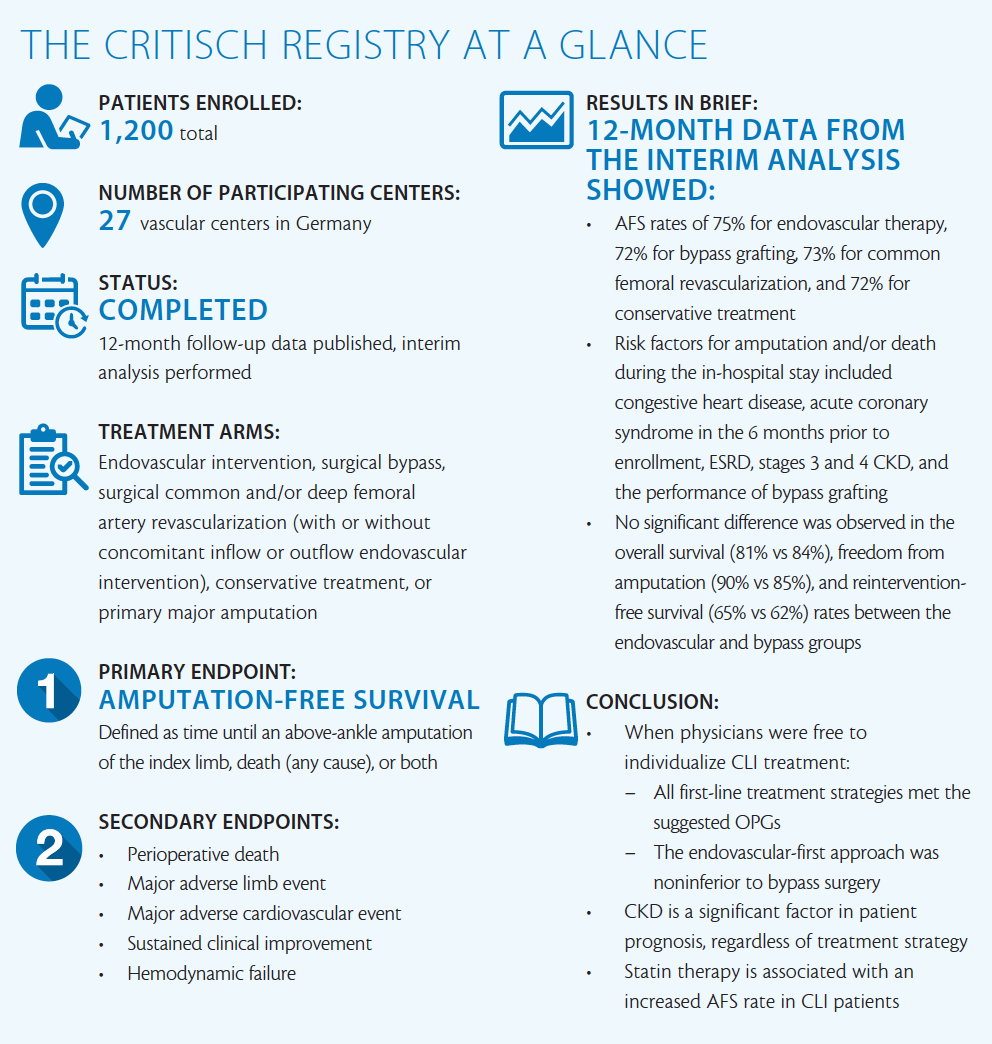 The CRITISCH registry was designed to prove the noninferiority of endovascular therapy to conventional bypass. Thus, in the framework of our preplanned interim analysis, we compared the endovascular approach to bypass surgery for the outcome of AFS. The interim analysis was carried out after the occurrence of 250 primary endpoint events.5

Moreover, due to the lack of randomization and the inhomogeneity of the various treatment groups, the effectiveness criteria for the 12-month outcomes of each treatment strategy were based on the Society for Vascular Surgery’s suggested objective performance goals (OPGs). The OPGs were designed to be standardized measures for the evaluation of proposed CLI devices via single-arm prospective data collection and were based on validated multicenter trial data sets of bypass surgery.6

Our initial hypothesis that endovascular therapy is not inferior to bypass was confirmed at a 2.5% level of significance. The AFS rate at 12 months was 75% after endovascular therapy and 72% after bypass grafting (hazard ratio [HR], 0.91; 95% confidence interval, 0.75–1.19). Additionally, no significant difference was observed in the overall survival (81% vs 84%), freedom from amputation (90% vs 85%), and reintervention-free survival (65% vs 62%) rates between the two groups. Regarding the suggested OPGs, all treatment groups reached the suggested benchmark of 71%, as the 12-month AFS estimates after endovascular treatment, surgical bypass, common femoral revascularization, and conservative treatment were 75%, 72%, 73%, and 72%, respectively.7

IMPACT OF RENAL FUNCTION IMPAIRMENT IN PATIENTS WITH CLI

A very important finding of the CRITISCH registry is the crucial role of CKD in the management of CLI. An impairment in renal function was found to be both an important parameter in the decision-making process and a significant determinant of a patient’s prognosis, regardless of the selected treatment strategy.8,9 Interestingly, endovascular treatment was preferred over conventional surgery in patients with CKD in the CRITISCH registry, despite the need for iodinated contrast. In regard to patients with ESRD, nearly two-thirds of these fragile patients were treated by endovascular procedures and were found to be at a significantly increased risk for both in-hospital complications and death or limb loss long term.

THE EFFECT OF STATINS ON PATIENTS WITH CLI

Secondary prevention of cardiovascular events in patients with CLI is paramount to reduce the marked increase seen in cardiovascular morbidity and mortality. For this reason, we evaluated the association between statin therapy and the risk for limb loss and mortality.10 For the purposes of this analysis, we excluded nonadherent patients and treatment crossovers. Notably, a very low rate of guideline adherence was observed, as statins were administrated in only 681 (57%) patients at baseline and were discontinued during the study period in 236 patients. Finally, 118 patients not receiving statins at baseline crossed over into the statin group, and 371 (31%) patients were not on statins during the entire study period.

Despite the well-known limitations of prospective registries, the CRITISCH registry showed that when physicians are free to individualize their approach in the treatment of CLI, all first-line treatment strategies can achieve satisfactory results. The ongoing randomized BEST-CLI and BASIL-2 trials will provide high-quality evidence about the treatment of limb-threatening ischemia, but their results will only be applicable in a minority of patients, namely in those who are candidates for both endovascular and surgical revascularization. However, due to the complexity of the disease, a more individualized approach rather than a general recommendation seems more meaningful. Moreover, the data from the CRITISCH registry show that in the treatment of CLI, even fundamental issues such as the impact of secondary prevention efforts or the presence of CKD are not fully understood and need to be examined.

Acknowledgments: The study was supported by the Germany Society of Vascular Surgery. The authors extend a special thanks to all CRITISCH registry collaborators.