Peripheral artery disease (PAD) of the lower extremities is a global pandemic of growing proportions. Between 2000 and 2010, the world’s population increased by 12.6%, and the prevalence of PAD has increased twice as much over this period.1 The Global Burden of Disease study reported that 202 million adults worldwide have PAD, a higher prevalence than ischemic heart disease (154 million), heart failure (64 million), Alzheimer’s disease/dementia (44 million), cancer (43 million), HIV/AIDS (36 million), and opioid addiction (27 million).2 Although most patients with PAD are asymptomatic, the disease increases the risk for cardiovascular morbidity and symptomatic disease progression. Patient prognosis after PAD diagnosis is poor because the disease often progresses to the extent that distal perfusion is insufficient to meet metabolic demands. This advanced PAD is commonly described as critical limb ischemia (CLI) and represents the end stage of the disease, mostly characterized by occlusive disease of the tibial and foot arteries in which patients suffer from rest pain, ischemic ulceration, and/or gangrenous tissue loss.

CLI IS COMMON BUT UNDERDIAGNOSED

Among the 9 million to 20 million adults with PAD in the United States, a reported 11% suffer from CLI.3,4 However, this likely represents a considerable underestimation. CLI prevalence is typically estimated from administrative claims databases using International Classification of Diseases (ICD) clinical diagnosis codes. Although use of administrative diagnosis codes yields high sensitivity when patients with a CLI diagnosis code likely have the disease, there is a corresponding loss of specificity when patients without a CLI diagnosis code may actually have the disease. Previous CLI studies utilizing administrative claims databases have used ICD-9-CM clinical diagnosis codes of 440.22 (rest pain), 440.23 (ulceration), and 440.24 (gangrene).5 Yet there are numerous complex CLI presentations possible that would be excluded from simplistic CLI diagnosis algorithms (eg, a patient diagnosed with PAD and diabetes who undergoes above-the-ankle amputation). Validation studies suggest that use of administrative codes for CLI diagnosis may underestimate the true prevalence by 25%.6 Given these factors, it can be estimated that between 1 million and 3 million Americans have CLI. 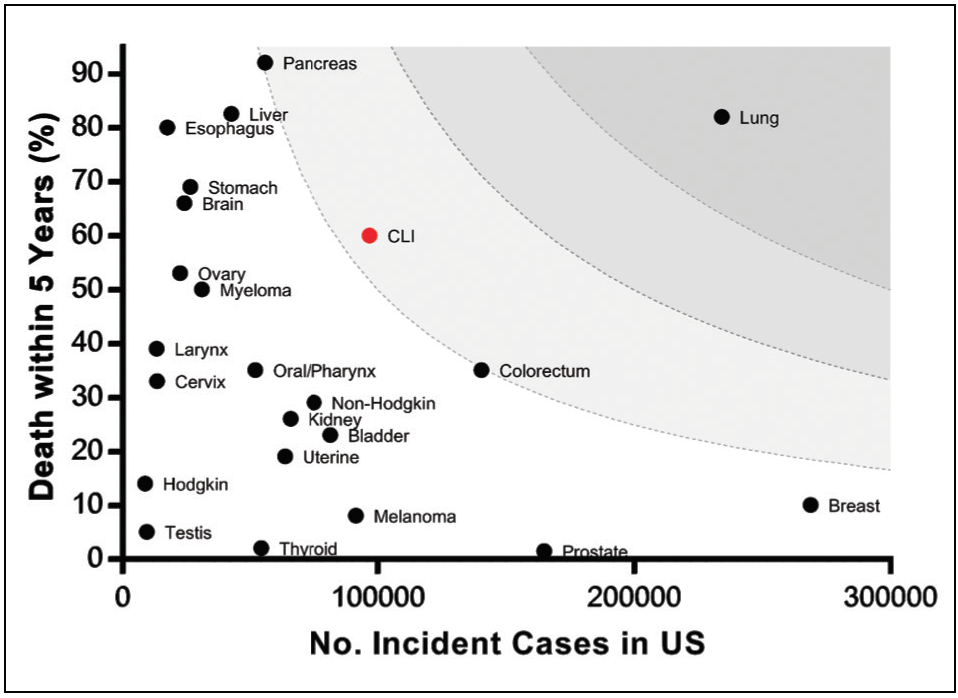 A helpful metric for quantifying the overall mortality burden of a disease is the 5-year incident mortality. That is, among all patients who receive a first-time disease diagnosis in a year, how many will die over the next 5 years? The annual incidence and 5-year mortality rate for CLI were derived from a Medicare claims analysis.5 We compared these values to those for 22 different types of cancer derived from the Cancer Statistics Center of the American Cancer Society.8 Because CLI is both common and deadly, more incident cases die over 5 years after a CLI diagnosis than with any type of cancer, except for lung cancer (Figure 1). When comparing incident cases of CLI and 22 types of cancer, the diseases responsible for the most deaths over 5 years in the United States are lung cancer (192,000), CLI (58,000), pancreatic cancer (51,000), colorectal cancer (49,000), and liver cancer (35,000). Overall, the high incidence of CLI in combination with its highly fatal course make this disease an underrecognized major threat to public health.

Adding to the poor prognosis after diagnosis of CLI, patients with this disease remain underserved with regard to diagnostic evaluation, medical therapy, and utilization of revascularization. Societal guidelines recommend that all individuals diagnosed with CLI undergo an imaging study to assess the viability of endovascular or surgical revascularization. Yet angiography is only performed in approximately one of four patients, despite the fact that patients who undergo angiography have a 90% lower risk of major amputation than patients who do not undergo angiography.9 Additionally, because patients with CLI typically present with extensive atherosclerosis and multiple systemic comorbidities, optimal medical therapy focused on diabetic control, antihypertensive medications, and antilipids is crucial to lowering the risk of cardiovascular complications, major amputation, and mortality. However, less than one-third of patients with CLI are prescribed optimal medical therapy.10

CLI AWARENESS MUST BE RAISED

In 2013, the Recalcitrant Cancer Research Act was signed into law by President Barack Obama to develop nationwide strategic plans to address the nation’s deadliest cancers. This is defined as those with 5-year mortality rates > 50%, which includes cancers of the pancreas, lung, brain, esophagus, liver, ovary, and stomach. This legislation authorizes governmental research agencies to develop a comprehensive plan of action to coordinate prevention, early detection, and treatment research to lower mortality rates associated with these cancers. Unfortunately, no such legislation is pending for CLI—even though the 5-year mortality of CLI is > 50%; the annual incidence of CLI is greater than that of esophageal cancer, stomach cancer, brain cancer, and ovarian cancer combined; and more people die from CLI each year than cancers considered to be among the deadliest. Therefore, we encourage collaboration among the major vascular, interventional, medical, and podiatric societies to continue raising public and health professional CLI awareness. Further, we advocate for the formation of alliances composed of multidisciplinary health care providers who will petition lawmakers in a focused, concerted effort to designate CLI as a national public health priority in the same way as the deadliest cancers. Only with a coordinated and comprehensive national plan to address all aspects of CLI, including diagnosis, treatment, and education of patients and health care providers, can the ever-growing impact of this deadly disease be controlled.