A status overview of six major clinical trials evaluating the use of covered stents in AV access treatment.

Percutaneous transluminal angioplasty (PTA) to treat clinically significant stenoses in hemodialysis arteriovenous grafts (AVGs) was first described by Glanz et al in 1984.1 Thirty-five years later, PTA remains the dominant method of treating hemodialysis circuit stenoses in both AVGs and arteriovenous fistulas (AVFs), although patency following PTA is fair at best. The Kidney Disease Outcomes Quality Initiative (KDOQI) guidelines recommend that patency after PTA of an AVG stenosis should be at least 50% at 6 months, which is largely based on retrospective studies and consensus.2 However, real-life outcomes often fall short when data are prospectively collected. In one cohort of prospectively followed AVG patients, the 6-month rate of clinical access circuit patency was only 41%, falling below the KDOQI recommended threshold.3

Various techniques have been researched to improve patency. Atherectomy and cryoplasty were briefly explored and were ineffective.4-6 Bare-metal stents (BMSs), as an adjunct to PTA, have equally failed to improve patency despite excellent immediate angiographic results.7-9 This is because recurrent in-stent restenosis typically develops within a few months, which limits patency. For the past 2 decades, BMSs have served as a salvage therapy when PTA was unsuccessful or when ruptures were encountered. However, studies have shown that bailout stent placement conferred no better patency than successful PTA.10-13

Improved patency after the treatment of lower extremity artery obstruction with drug-coated balloons (DCBs) has led to exploratory use of DCBs in hemodialysis circuits. The randomized controlled trial that compared the Lutonix AV DCB (BD Interventional) with standard balloon angioplasty found that the primary efficacy endpoint of treatment area patency was not statistically different from PTA at 180 days.14 Although target lesion patency is important in determining the effect of a tested intervention, primary postintervention circuit patency is paramount to the patient, the payor, and the dialysis center. Although the Lutonix AV DCB trial showed a statistically better result using a DCB for a number of secondary endpoints and appeared to lengthen the time between interventions, AVF primary circuit patency has not been demonstrated.

However, one study rarely provides definitive answers, and we await the results from the IN.PACT AV Access investigational device exemption trial, in which a different paclitaxel-coated DCB (IN.PACT AV Access, Medtronic) is being studied. Hopefully, this clinical study will expand our understanding of the role of DCBs in hemodialysis circuits. However, even if effective, the signal for increased late mortality rates seen in patients with peripheral artery disease who have been treated with paclitaxel may impact the use of DCBs in hemodialysis access.15

Covered stents, also known as stent grafts, remain the only hemodialysis circuit intervention that has been proven superior to PTA. Polytetrafluoroethylene-covered stents have repeatedly shown improved target lesion and access circuit patency compared with balloon ­angioplasty. Table 1 summarizes the results of six (mostly randomized) trials that validate the superiority of covered stents in AVGs and, more recently, in AVFs.16-21 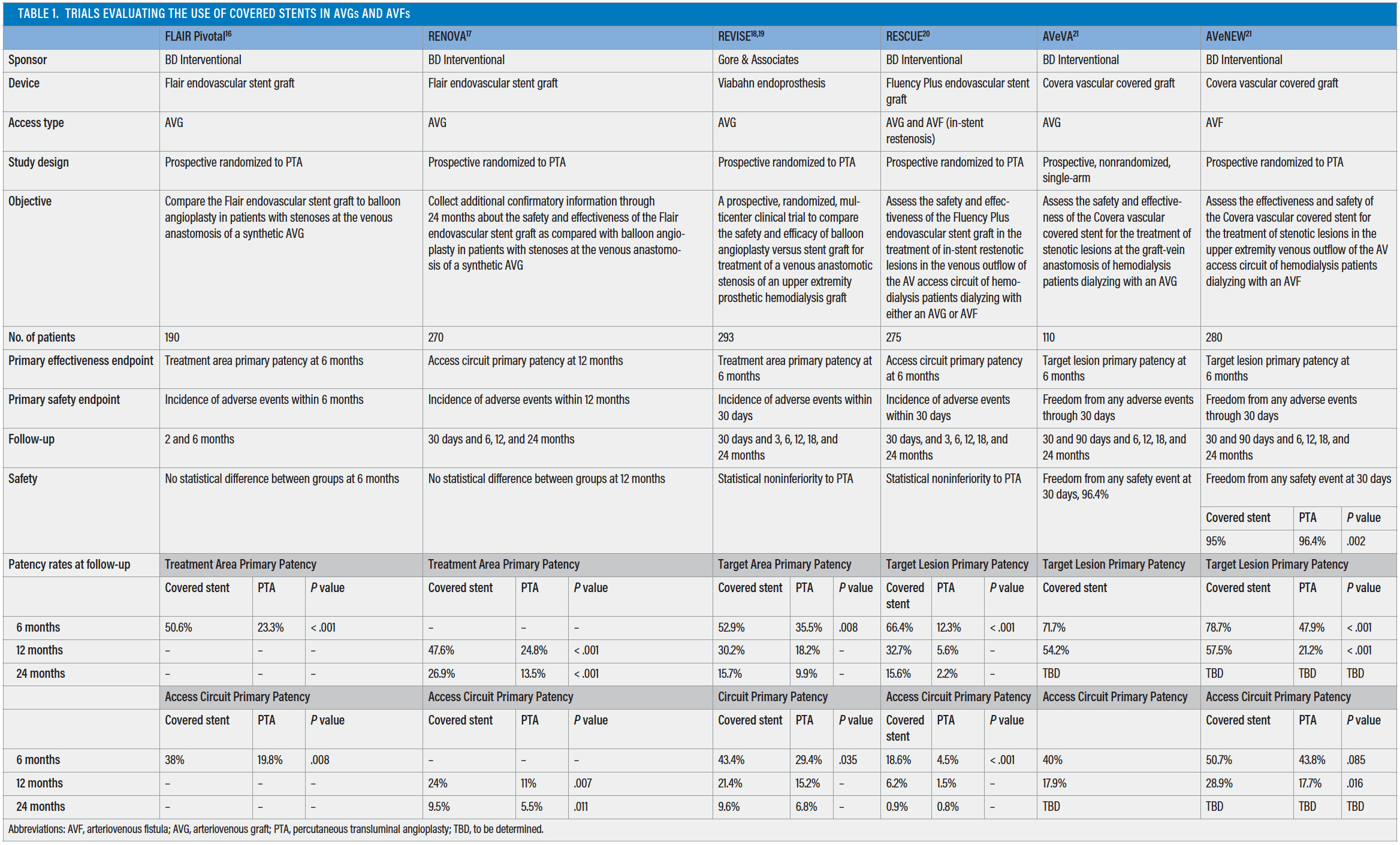 FLAIR pivotal trial. The FLAIR pivotal trial first characterized the effect of covered stents in hemodialysis circuits by randomizing 190 patients with AVG anastomotic stenosis to best practice PTA or post-PTA insertion of a tubular or flared Flair endovascular stent graft (BD Interventional) sized 1 mm larger than the initial PTA balloon.16 All patients enrolled had both a ≥ 50% anastomotic stenosis and some clinical measure of AVG dysfunction. Approximately one-third of the patients had a second stenosis elsewhere in the circuit that was successfully dilated with PTA prior to randomization of the primary treatment area. Thrombosed grafts, across-the-elbow lesions, and highly angulated anastomoses were intentionally excluded in order to render a cleaner cohort in this first-in-human, prospective, randomized covered stent trial. Data collection included mandatory 2- and 6-month angiograms, so that both angiographic core lab and clinical outcomes could be used to determine treatment area patency and circuit patency.

RENOVA clinical trial. RENOVA was a postmarket trial that used clinical endpoints to determine patency after use of PTA or the Flair device in 270 randomized patients followed to 24 months.17 Once again, superior treatment area patency and primary circuit patency were demonstrated using the covered stent, with follow-up out to 2 years. Patency numbers in both groups were higher than in the Flair pivotal trial because there was no mandatory angiographic follow-up, and therefore, there was no loss of patency due to angiographic findings alone. Patients only lost patency if they developed clinical signs of access circuit dysfunction or thrombosis. Both studies affirmed durable, clear-cut graft and access circuit patency improvements for covered stent use with fewer interventions per patient until the point of graft abandonment.

REVISE clinical trial. REVISE was a 2-year randomized controlled trial comparing the use of the Viabahn endoprosthesis (Gore & Associates) with PTA in stenotic or thrombosed AVGs in 293 patients.18,19 Target lesion patency and access circuit primary patency were both significantly better at the 6-month primary endpoint. REVISE added to the cumulative covered stent experience in AVGs by replicating the results of the FLAIR and RENOVA studies, as well as newly demonstrating patency advantages when covered stents were used in thrombosed grafts or an across-the-elbow joint.

AVeVA clinical trial. AVeVA (NCT02790606) is one of two ongoing prospective covered stent trials based on the Covera vascular covered stent (BD Interventional). AVeVA is a 2-year, single-arm, prospective, multicenter investigation of Covera to treat stenoses at the venous anastomosis of both stenotic and thrombosed AVGs. Aside from inclusion of thrombosed AVGs, the study mimics the design of the FLAIR and RENOVA trials and uses their outcomes as comparative benchmarks. Results show that both treatment area patency and access circuit patency exceed FLAIR and RENOVA results at the 6-month primary endpoint.21 The Covera covered stent has been recently cleared by the FDA for use in AVGs at the venous anastomosis.

AVeNEW clinical trial. AVeNEW (NCT02649946) is the second ongoing, randomized, 2-year, prospective, multicenter trial evaluating the Covera covered stent in the treatment of AVF stenosis. Enrollment of 280 patients and 12-month follow-up have been completed. Interim results show that the Covera vascular covered stent improved AVF target lesion area patency and access circuit patency compared with PTA alone.21 Subgroup analysis of the sites of stenosis demonstrates better outcomes at all sites, including the cephalic arch, where postangioplasty recoil and restenosis are common. Both studies evaluating the Covera stent have reported interim 12-month data at scientific congresses and these data have been submitted to the FDA.

We await completion of the AVeVA and AVeNEW studies to 24 months with full manuscript submission and peer-reviewed publication. Beyond those two ongoing trials, there have been no prospective multicenter trials of covered stents for primary thoracic central vein stenosis or occlusion in hemodialysis patients. Few meaningful data exist regarding salvage of thrombosed AVFs using covered stents or their use in the cannulation segment of AVGs and AVFs for either stenosis or pseudoaneurysms. Some studies may be natural next steps, while others may never be done. However, results from the six multicenter prospective clinical trials reviewed in this article show that covered stents, used as intended in hemodialysis circuits, are an important adjunct to PTA. With this research, access interventions have finally and permanently moved into the arena of level 1 evidence, providing definitive and clear-cut value for patients. Covered stents improve both treatment area patency and overall access circuit patency. They also reduce the number of reinterventions, which is a critical benefit for patients and bring economic advantages to the United States Medicare end-stage renal disease population.22,23 Progress has been made and our patients are the beneficiaries.

19. W.L. Gore & Associates. Instructions for use for Gore Viabahn endoprosthesis. https://www.goremedical.com/products/viabahn---ifu/instructions. Accessed May 21, 2019.

22. Dolmatch B, Hogan A, Ferko N. An economic analysis of stent grafts for treatment of vascular access stenosis: point-of-care and Medicare perspectives in the United States. J Vasc Interv Radiol. 2018;29:765-773.

The impact that current CMS reimbursement has had on the settings for dialysis access care and a look ahead at the forthcoming rate decisions.

A multidisciplinary discussion on patient selection, achieving proficiency, procedural tips, and the importance of collaboration.

A status overview of six major clinical trials evaluating the use of covered stents in AV access treatment.

Panel Discussion: What Is the Future of Paclitaxel-Coated Balloons in AV Access?

Key investigators discuss the impact of the JAHA mortality and safety meta-analysis and what it means for ongoing studies, follow-up protocols, informed consent, and more.