Mixed Ulceration From Arterial and Venous Insufficiency: Is There an Algorithm for Treatment?

An 80-year-old woman with a history of chronic renal insufficiency, ischemic cardiomyopathy, and peripheral artery disease presented initially with lifestyle-limiting claudication of the left lower extremity. Physical examination revealed nonpalpable pulses except for Doppler signal of the left dorsalis pedis artery. Ankle-brachial index (ABI) of the extremity was 0.43, suggestive of occlusive femoral disease. Angiography of the left common femoral artery with runoff revealed distal left superficial femoral artery occlusion (Figure 1A) with reconstitution of the distal popliteal artery and two-vessel runoff into the left foot via the anterior tibial and peroneal arteries (Figure 1B). Figure 1. Angiogram of the left lower extremity revealing occlusion (arrow) of the distal superficial femoral artery (A) and reconstitution of the distal popliteal artery and runoff (arrow) via the anterior tibial artery (B). 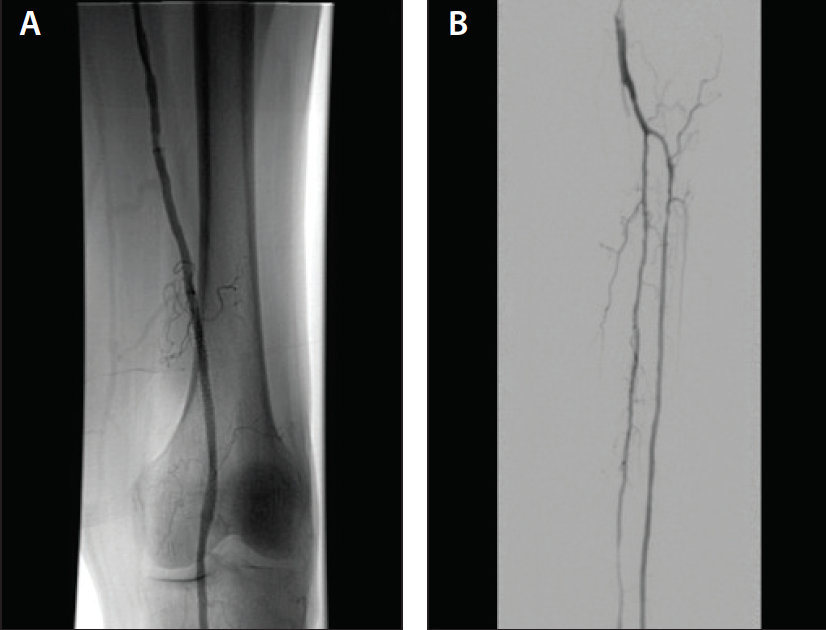 Figure 2. Angiogram after revascularization with balloon angioplasty and stenting (A) and two-vessel runoff (B).

Revascularization of the occlusion was performed using balloon angioplasty and stent placement (Figure 2A) with a good angiographic result and runoff (Figure 2B). She had complete resolution of her claudication symptoms but returned 1 year later with ulceration of the medial aspect of her left foot above the medial malleolus. Repeat angiography revealed restenosis of the stent (Figure 3A) and reocclusive disease of the distal popliteal artery stent extending into the anterior tibial artery (Figure 3B). Figure 3. Follow-up angiogram revealing restenosis in the superficial femoral artery stent (A) and outflow lesion in the distal popliteal artery (B). The patient was successfully revascularized (Figure 4). However, the ulceration progressed despite revascularization, prompting referral to my practice for further evaluation of the etiology of her ulcer 6 months after revascularization (Figure 5). Figure 5. Image of the active ulcer above the medial malleolus of the left foot. 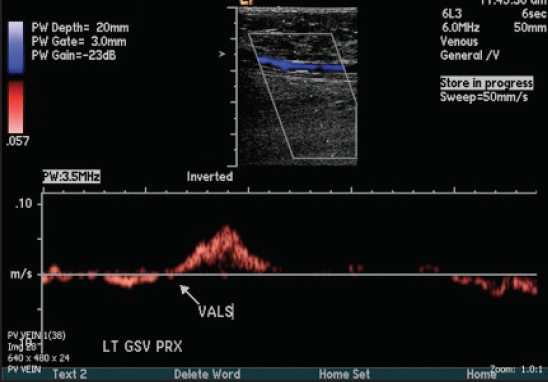 A venous Doppler study of the left lower extremity revealed severe reflux of the left greater saphenous vein (Figure 6) with flow above baseline in the proximal, mid, and distal portions of up to 1.7 seconds. An incompetent perforating vein (0.33 cm in diameter) was also noted in the left calf 23 cm from the ankle (Figure 7). Figure 7. Venous duplex of a pathologic incompetent perforator vein in the left lower extremity above the ulcer. She subsequently underwent radiofrequency ablation of the left greater saphenous vein followed by the left calf perforator with complete occlusion by ultrasound (Figure 8).

At 3-month follow-up, the patient had complete healing of the ulceration and no residual symptoms (Figure 9). Figure 9. Image of the healed ulcer above the medial malleolus of the left foot 3 months after radiofrequency ablation.

Various types of lower extremity ulcers exist, including venous, arterial, neuropathic, lymphatic, malignant, infectious, medication-induced, and inflammatory1; therefore, clinical history and physical examination are necessary to distinguish them. Venous ulcers, although more common, are often mistaken for arterial ulcers, which range from 10% to 30% of all lower extremity ulcerations.4 Arterial ulcers are typically more painful; affect the toes, heel, malleoli, or anterior shin4; and are caused by arterial insufficiency. The main mechanisms of venous ulcers are reflux, venous outflow obstruction, or a combination of both5 and are predominantly found within the gaiter area above the medial malleolus.2 However, in some subsets of patients, both arterial and venous disease coexist, and they develop ulcerations from mixed etiologies.2 In these cases, the dominant disease process must be teased out and treated first.

Clinical history and physical examination are critical in diagnosis, including comorbid conditions, history of arterial or venous disease, prothrombotic states, quality of symptoms, and location of the ulcer. Noninvasive diagnostic tests of choice include ABI for diagnosis of peripheral arterial occlusive disease4 and duplex ultrasound for venous reflux or thrombosis.6

The mainstay of treatment for arterial insufficiency is revascularization via endovascular techniques or surgical bypass,7 while that of CVD includes compression stockings, endovenous ablation, ambulatory phlebectomy, or surgical stripping.8 Endovenous ablation, via laser or radiofrequency, causes direct thermal injury to the vein wall, resulting in destruction of the endothelium, collagen denaturation of the media, and fibrotic and thrombotic occlusion of the vein,8 and has become the most popular invasive approach for treatment of chronic venous insufficiency. 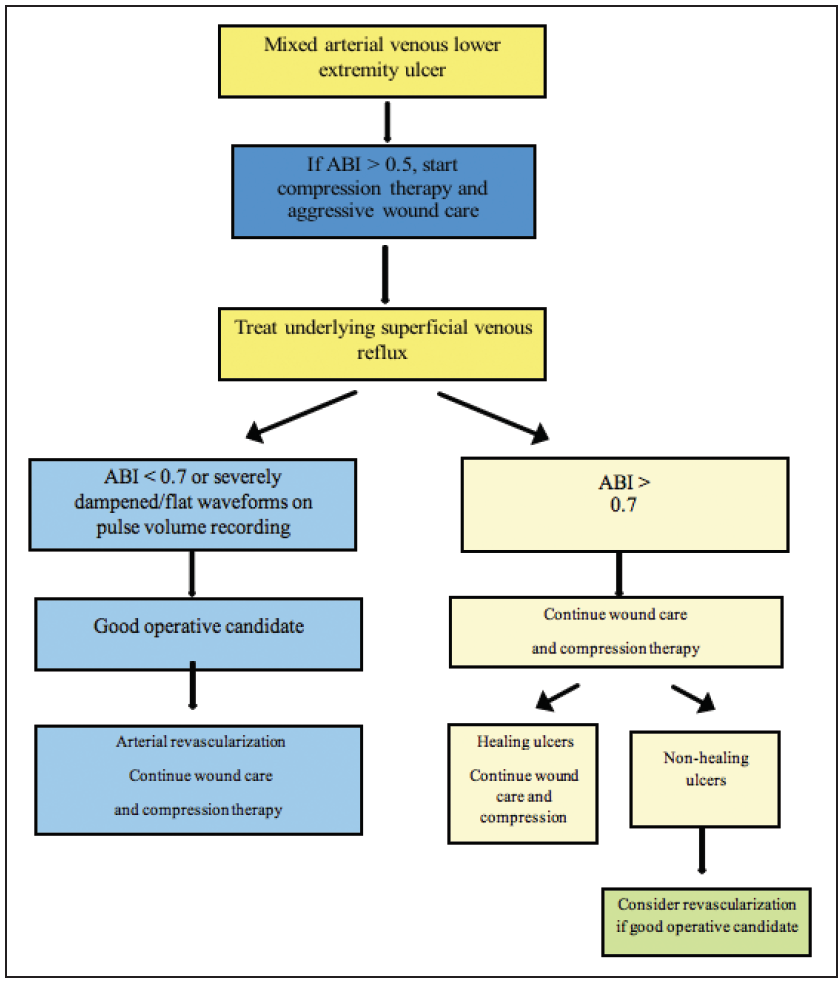 Coexistence of arterial and venous disease is estimated to be present in up to 26% of patients with lower extremity ulcerations.9 The treatment of these mixed ulcers is optimally achieved by following an algorithm that involves assessment of the wound and degree of arterial and venous insufficiency. While there is no consensus on treatment of these mixed ulcers, the algorithm proposed by Hedayati et al is a popular approach (Figure 10).10

A look at the existing and emerging stents being used to treat venous obstruction.

The Unknowns of Venous Stenting: Why Do Good Cases Go Bad?

An assessment of technical, hematologic, and flow-related factors after stent failure provides a framework for reintervention.

Experts discuss the main takeaways of key trials in deep venous thrombosis therapy, nuances in their designs and data, whether the results have affected referrals, and more.