What Would You Do?

Enlarging AAA in a Patient With Multiple Comorbidities 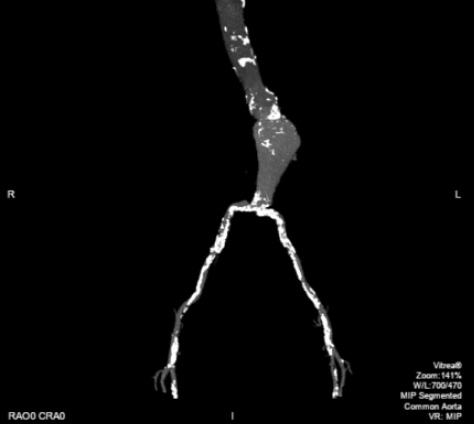 A 79-year-old woman who is a current smoker with a 40 pack-year history and a history of chronic obstructive pulmonary disease (COPD) and morbid obesity presents with an enlarging aneurysm (Figure 1, Figure 2, Figure 3, Figure 4, Figure 5 and Figure 6). In addition, she has chronic back pain and ambulation is limited with frequent use of a wheelchair. In 2015, she was diagnosed with a 5.5-cm aneurysm and was told that her anatomy was too complex for repair. She has been followed at another institution and now presents with a 6-cm aneurysm. She is seeking a second opinion regarding repair. 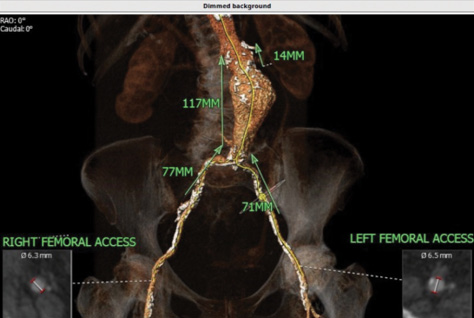 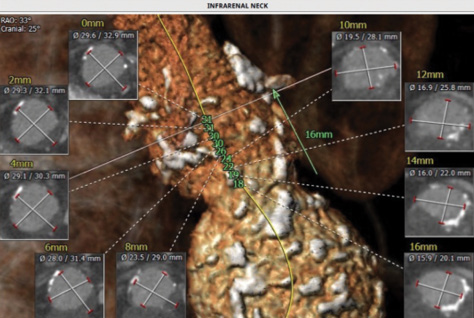 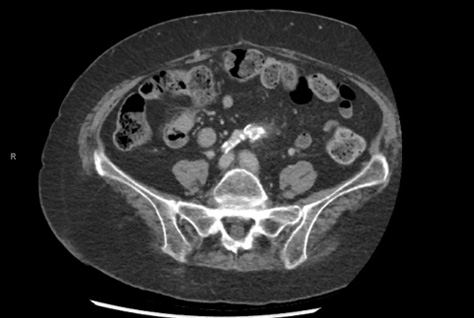 Figure 4. Selected image of the narrow and calcified aortic bifurcation.

Would you offer repair (open or endovascular) to a current smoker with limited ambulation and an enlarging aneurysm?

Dr. Ullery: Although certainly important in the overall preoperative risk assessment, smoking status and the ambulatory capacity of a patient with an enlarging aneurysm does not independently prohibit open or endovascular aneurysm repair in my practice. To that end, there is increasing enthusiasm—including by the Society for Vascular Surgery in its recent abdominal aortic aneurysm (AAA) practice guidelines—to incorporate Vascular Quality Initiative perioperative mortality risk scores into preoperative discussions to guide clinical management decisions in such high-risk patients.

Figure 5. Reconstruction images with diameter measurements of both iliac systems. 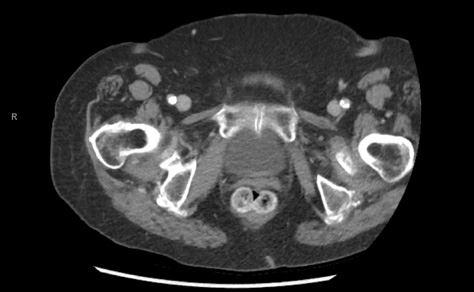 Dr. Jim: Elective repair of infrarenal AAA is primarily determined by the maximum diameter of the aneurysm. In addition to size, the decision to intervene is also dependent on the patient’s fitness for surgery. The physician must balance the potential for future rupture (if no intervention is performed) with the risk of periprocedural complications and overall life expectancy. As the goal of treatment is to prevent catastrophic rupture (with 90% mortality), active smoking and limited ambulation status do not necessarily preclude a patient from undergoing intervention. In a patient with an enlarging aneurysm who is interested in surgical repair, careful assessment of the patient’s fitness for surgery and overall quality of life should be undertaken. Although endovascular intervention does not lead to improved long-term outcomes compared with open surgery, there is clearly a lower risk of periprocedural complications. As such, endovascular treatment is preferred in patients with significant medical comorbidities.

Dr. Veeraswamy: I would not base the decision on her ambulatory status. I would certainly encourage smoking cessation but, again, would not base a treatment decision for a life-threatening aneurysm on her smoking status. The AAA has only grown 5 mm over 4 years. I would base the decision to intervene on her life expectancy, considering her obesity and COPD versus the rupture risk, which would be in the range of 4% to 10% per year.

What if the aneurysm were stable at 5.5 cm over the past 3 years?

Dr. Ullery: This is a somewhat more challenging scenario. In this high-risk patient with a stable asymptomatic aneurysm at the threshold for elective repair, I would likely continue to offer endovascular repair, as long as her life expectancy was anticipated to be beyond 2 years or so. I am far less likely to offer this high-risk patient an elective open repair (or off-label endovascular repair, for that matter) given the demonstrated stability of her aneurysm on serial surveillance imaging studies.

Dr. Jim: The patient’s aneurysm has reached the traditional size threshold of 5.5 cm for elective repair. Stability in the size over time certainly provides reassurance for continued imaging surveillance and makes a recommendation for intervention less likely. However, the aneurysm remains at risk for rupture. A thorough discussion should be undertaken to determine whether the patient is interested in undergoing repair as previously detailed. If the patient ultimately decides against elective repair, there should be a conversation with regard to the goals of care if the patient presents with a ruptured aneurysm. The patient should be advised that the operative outcomes for a ruptured aneurysm are likely worse than those of an elective repair, and it is best to determine if the patient would be interested in repair in that clinical situation. 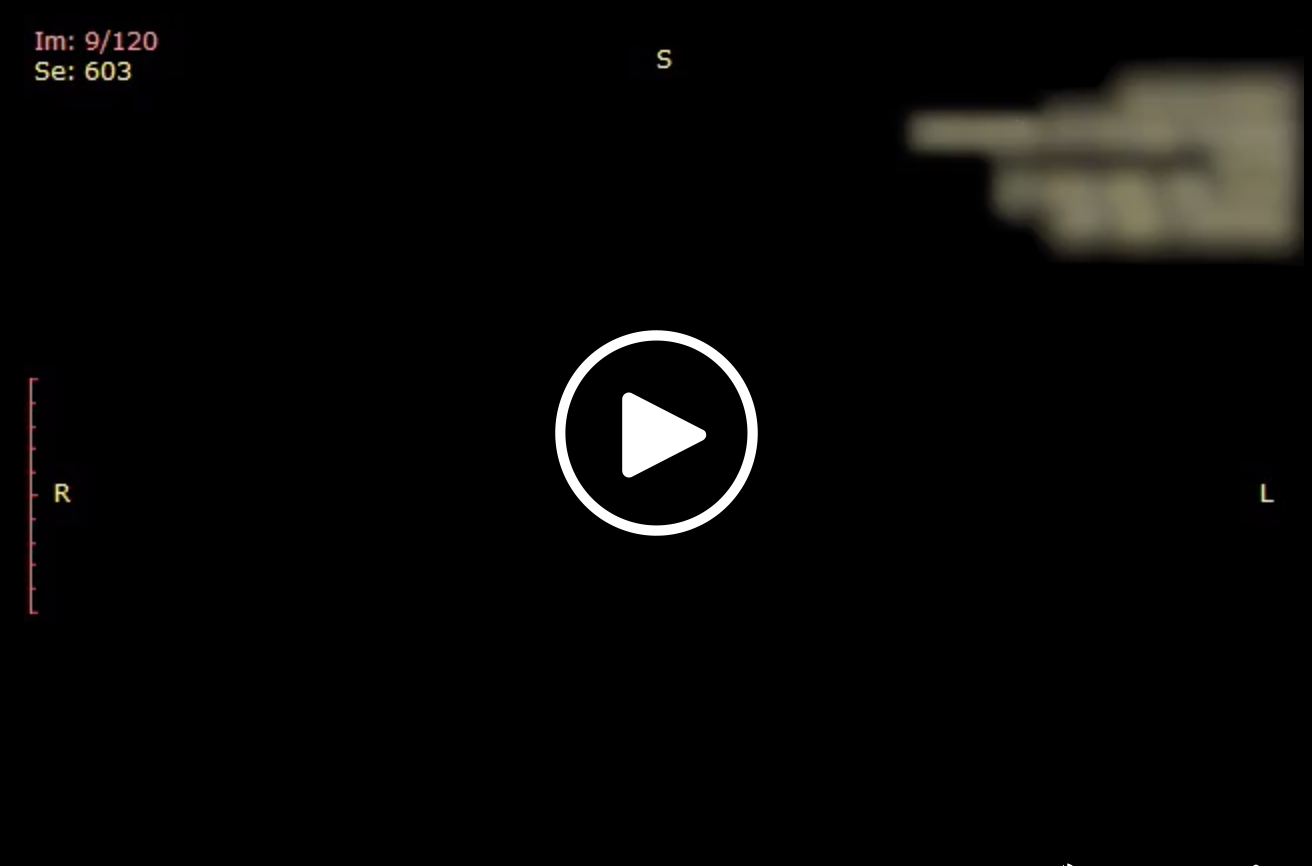 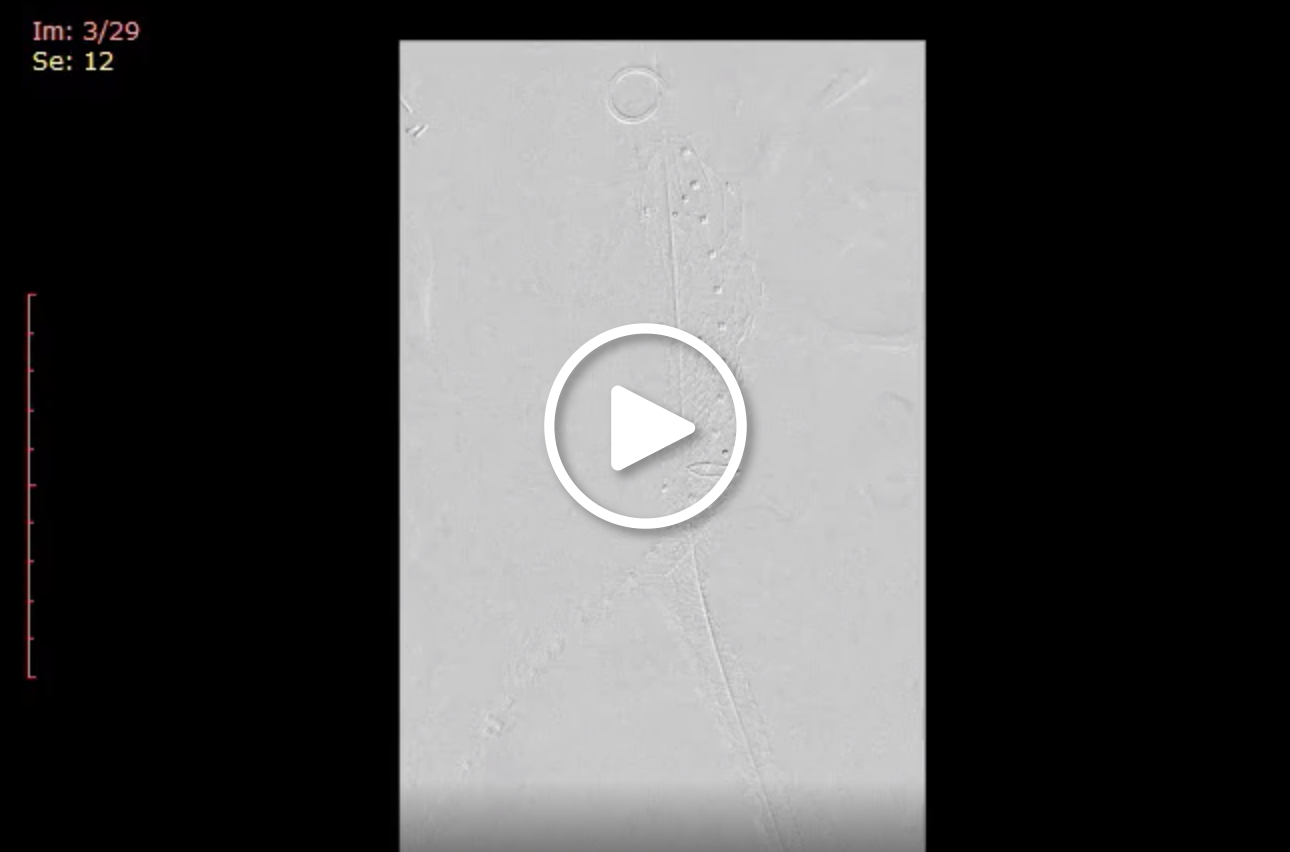 Dr. Veeraswamy: I would not offer repair at a stable size of 5.5 cm. I would instead offer continued surveillance.

You have decided that she should undergo elective repair. Based on her anatomy, is an endovascular repair feasible? What are the options, and would you consider open surgery?

Dr. Jim: Based on this patient’s anatomy, endovascular repair is feasible, but there are several challenges to address. She has a hostile aortic neck with a short length, large diameter, and reverse taper/conical morphology, which may prevent adequate proximal seal and presents a risk for long-term failure. Her iliac arteries are small in caliber with severe calcification, and her diseased femoral arteries may prohibit percutaneous access. An attempt at endovascular treatment can be undertaken with surgical exposure of the bilateral common femoral arteries for access. The iliac arteries can be serially dilated to ensure safe delivery of the main body endograft. Alternative options such as endoconduits or surgical conduits may also be utilized. Heli-FX EndoAnchors (Medtronic) should be placed circumferentially at the proximal neck to enhance adequate proximal seal and prevent future failure (endoleak or neck dilatation). For the diseased distal aorta and iliac artery seal zone, kissing balloon angioplasty (with possible bare-metal stents) may be necessary to ensure adequate lumen size of the iliac limbs. Open surgery may be considered after a thorough preoperative evaluation. However, this patient has a high risk of postoperative complications (especially respiratory) and this should be considered. 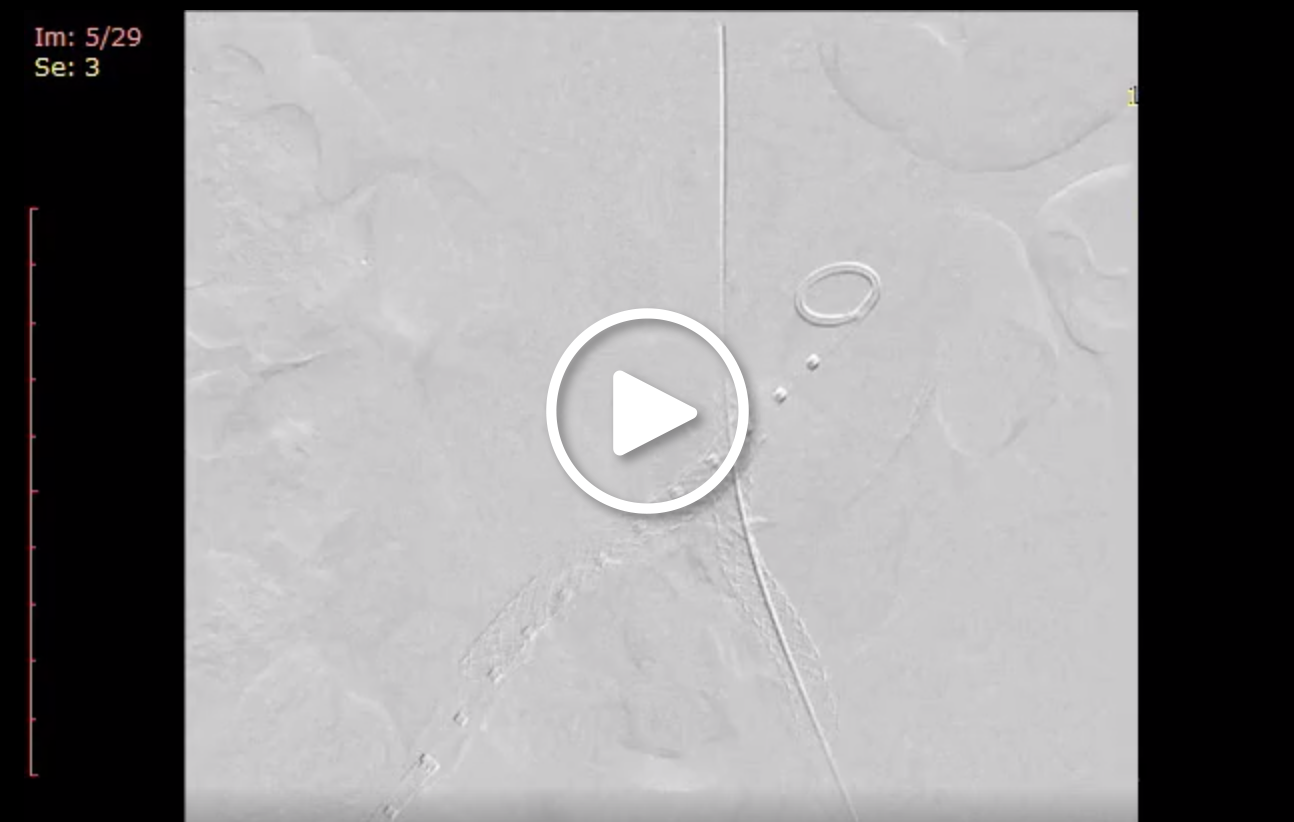 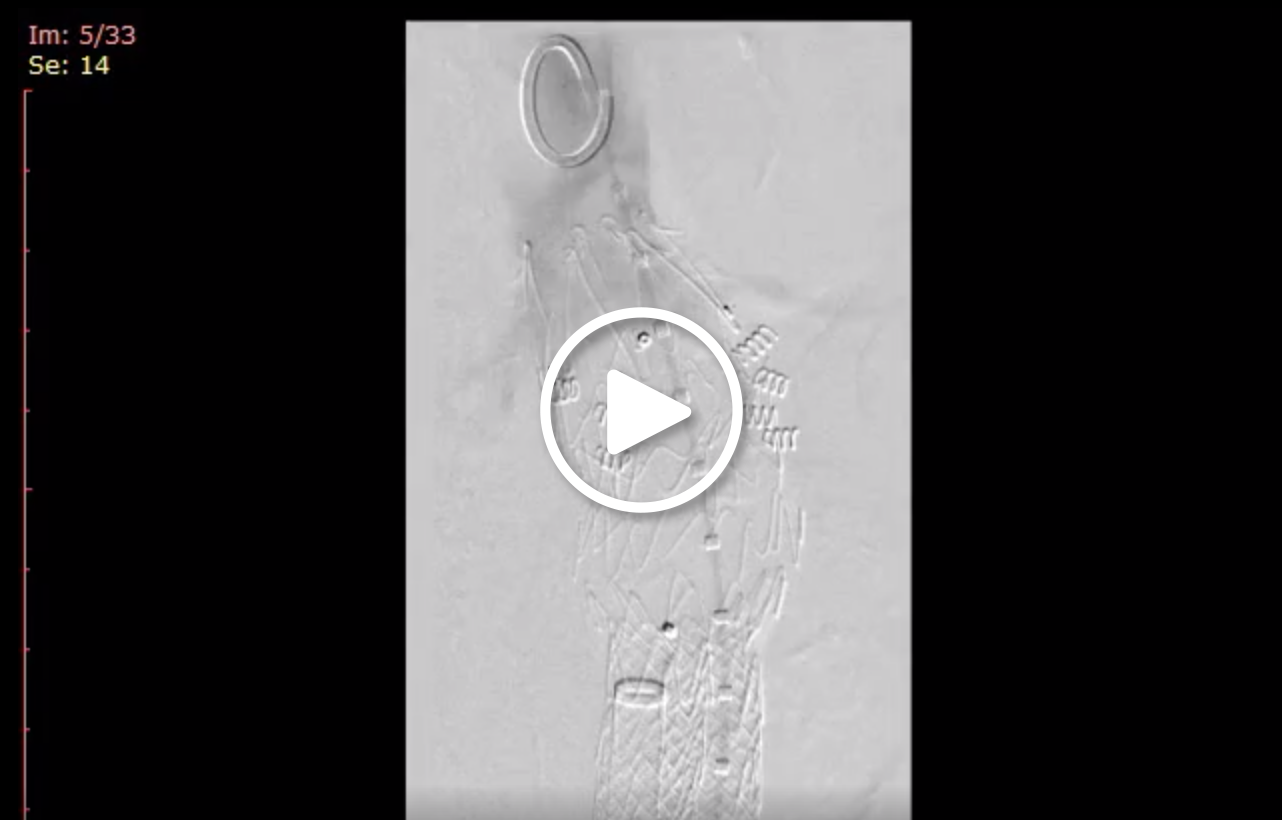 Dr. Ullery: Both open and endovascular options are viable in this case. An open repair would require reconstruction with aortobifemoral bypass given the concomitant dense iliac occlusive disease. However, given her body habitus and comorbid status, I would favor an initial primary endovascular approach. To that end, her infrarenal neck anatomy is considered hostile based on a variety of factors, including wide neck diameter, short neck length, and presence of thrombus/calcium in the proximal seal zone. The renal artery ostial occlusive disease and severely compromised iliofemoral access limit the utility of a customized fenestrated approach in this patient. As such, I would first consider endovascular aneurysm repair (EVAR) with the Heli-FX EndoAnchor system to augment radial fixation and sealing in this challenging neck. There appears to be adequate neck length for an on-label Heli-FX EndoAnchor system case (≥ 4 mm). I would be a little concerned, however, with the potential for inadequate penetration of EndoAnchors along the left posterior wall secondary to the degree of thrombus at that level. As such, intravascular ultrasound may be required to interrogate that area and guide EndoAnchor placement should a proximal endoleak be noted intraoperatively.

In my experience, a good technical result can still be obtained when calcium/thrombus involves < 50% of the aortic circumference at the seal zone, provided it is not extremely thick. If an endoleak remains after repeat aggressive balloon molding and placement of additional EndoAnchors, options include placing a Palmaz stent (Cordis, a Cardinal Health company) or raising the seal zone with bilateral renal chimney stents (although there are insufficient data to guide this approach due to the lack of available information on the arch anatomy and length between the superior mesenteric and renal arteries). 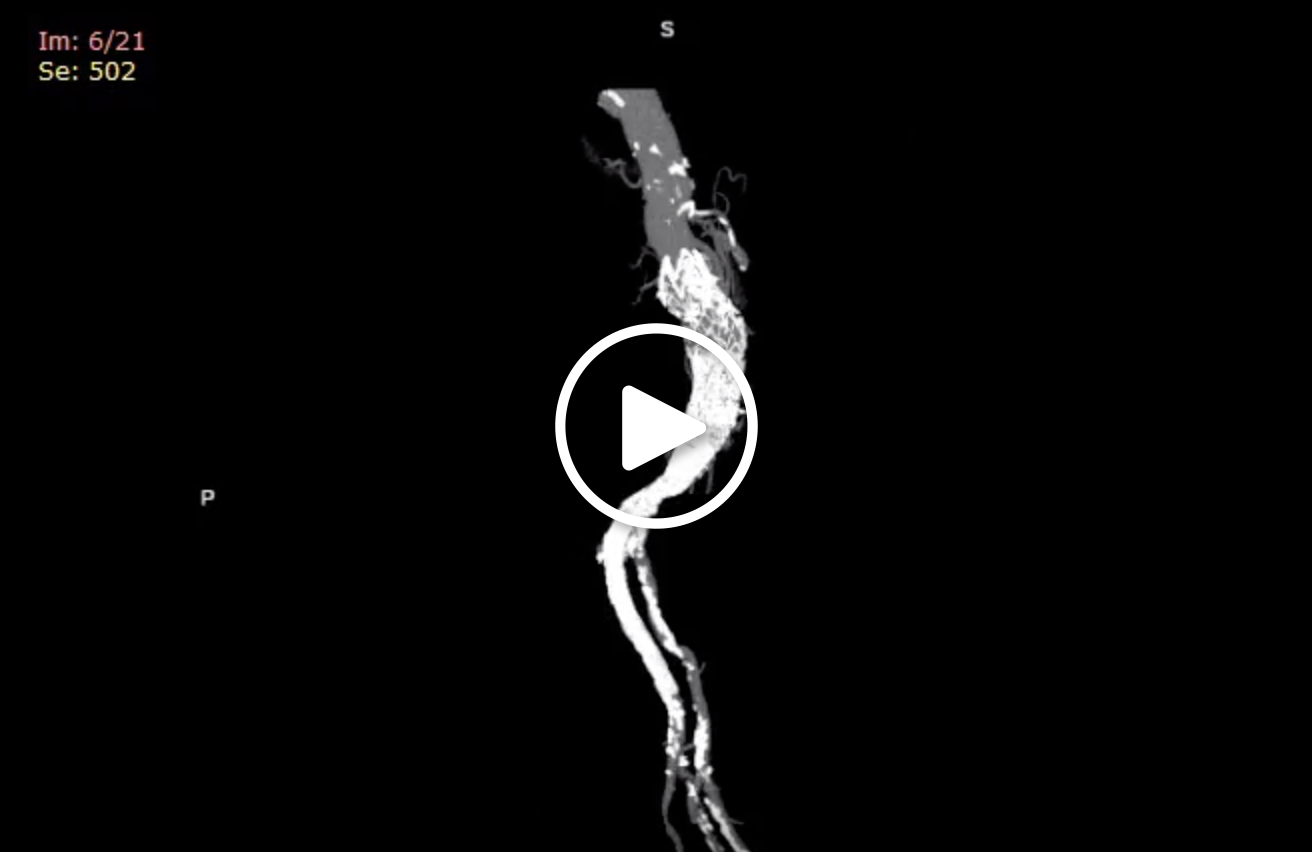 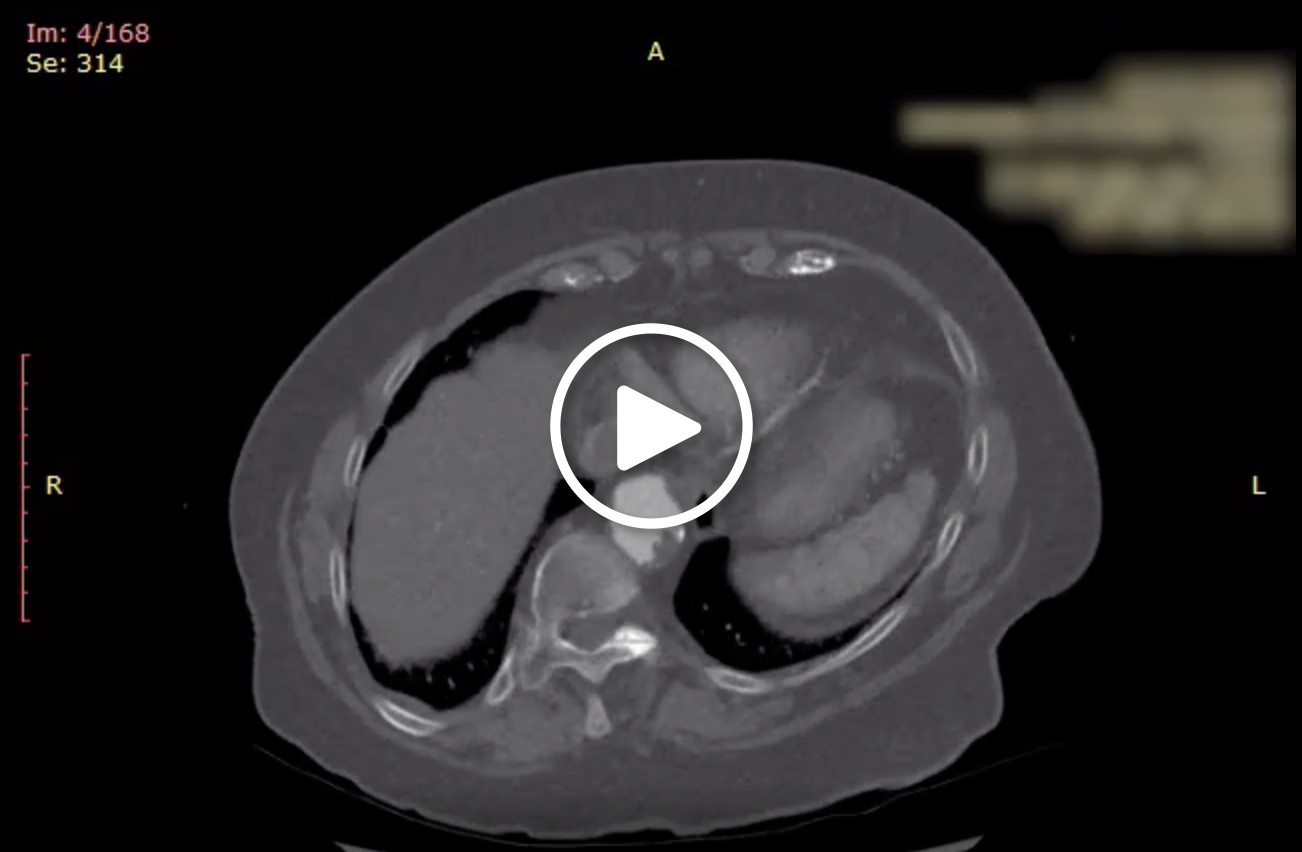 The second anticipated challenge would be access anatomy. Using a conventional EVAR device with Heli-FX EndoAnchors would obviate the use of a larger fenestrated device and decrease the likelihood of access-related complications. An endoconduit, particularly on the left side, would be advantageous in this case. A bifurcated device still may be possible after initial endoconduit placement, but I would plan on scrutinizing this configuration with multiple completion angiograms and using intravascular ultrasound to avoid potential iliac limb occlusive events. I would also be prepared for a potential aorto-uni-iliac configuration with femorofemoral bypass if any issues arise in the left iliac system. Lastly, this is not a great percutaneous case given the calcium burden of her iliofemoral segment, so I would plan on open femoral exposure (which also sets you up for femorofemoral bypass should an aorto-uni-iliac configuration be needed).

Dr. Veeraswamy: I would not consider open repair in a 79-year-old with COPD and morbid obesity. I think the surgery itself would go fine, but her recovery would be prolonged and problematic. Although her anatomy presents some obstacles to an endovascular repair, these can probably be overcome safely in a center with EVAR experience. Her access vessels are on the small side and calcified, so I would be prepared to use an endoconduit with Viabahn stents (Gore & Associates) to deliver the main body.

Based on these images, it appears that she would be a candidate for a 36-mm Zenith fenestrated endovascular graft (Cook Medical), although the location of the superior mesenteric artery is not clear on these images. She could also undergo repair using bilateral renal snorkels, based on these images. I am wary of thoracic disease and tortuosity in these patients and would want a formal chest CTA prior to undertaking that approach.

At our center, we have more experience with fenestrated devices and would start with that as our initial plan unless her aortic neck anatomy precluded it. There is some occlusive disease at the renal artery origins, but this is usually manageable and is “treated” with the fenestration bridging stent or the snorkel stent. Overall, this is a challenging case primarily due to iliac disease, but it can likely be safely and successfully performed by experienced operators.

APPROACH OF THE MODERATOR

I did not think she was a good candidate for open surgery due to her obesity and other medical risk factors. Her aortic anatomy and calcification made open repair very challenging as well. My initial plan was to attempt placement of an aorto-uni-iliac device due to her severe aortic bifurcation disease. But, I was able to place kissing stents and create a conduit to place a bifurcated device. I treated the proximal neck with an Endurant IIs device (Medtronic). I added Heli-FX EndoAnchors due to the challenging aortic neck anatomy. I then completed the repair with balloon-expandable Viabahn stents as endograft limbs. She recovered well from surgery and had a short stay in the hospital. A CTA at 1-month postprocedure revealed a technically good result without evidence of an endoleak and patent iliac limbs.

This patient’s complex situation motivated me to find a unique solution with a less invasive repair option. The combination of devices worked well to avoid the risk of open surgery and eliminated the need for femoral exposure incisions with an underlying prosthetic graft if an aorto-uni-iliac device was placed.

By John A. Kaufman, MD

Optimizing Endovascular Treatment for Multilevel Disease in Patients With CLI

Enlarging AAA in a Patient With Multiple Comorbidities