A 62-year-old man presented with a 2-month history of worsening bilateral calf pain (worse in the left leg) when walking one block. He complained of numbness in both feet when sleeping, which improved by dangling his legs. There were no leg or foot ulcers. Cardiovascular risk factors included an 8-year history of insulin-dependent diabetes mellitus, dyslipidemia, and hypertension. He denied coronary artery disease, cerebrovascular disease, renal impairment, or smoking history. Medications included insulin, losartan, omega-3 fish oil, gemfibrozil, and gabapentin. On examination, femoral pulses were intact and the popliteal, posterior tibial, and right dorsalis pedis pulses had audible Doppler signals. Pallor with elevation and mild dependent rubor were noted in both legs, and there were atrophic changes with hair loss and brittle nail beds. No edema or wounds were noted. Arterial imaging was performed and showed bilateral femoropopliteal occlusive disease.

The patient underwent left lower extremity angiography from a right femoral approach showing an approximately 20-cm-long chronic total occlusion (CTO) of the left superficial femoral artery (SFA) reconstituting the popliteal artery at the level of the adductor canal (Figure 1, arrow). Attempted antegrade puncture repeatedly resulted in collateral wire passage (Figure 2, arrows). Retrograde distal popliteal access was achieved that allowed for the insertion of a 5-F sheath and subintimal recanalization with a 5-mm balloon positioned at the SFA occlusion (Figure 3, asterisk). From the contralateral approach, an Outback Elite catheter (Cordis, a Cardinal Health company) was advanced adjacent to the balloon (Figure 3, open arrow) and successful puncture was performed into the retrograde balloon. Once the wire was externalized and through-and-through access was achieved, a 6-mm angioplasty was performed that resulted in restored arterial patency with multiple grade C and D dissections (Figure 4, curved arrows), which was confirmed with intravascular ultrasound (IVUS) (Figure 5, dissection marked with arrows). Using the Tack Endovascular System® (Intact Vascular, Inc.), a total of six Tack® implants were deployed and postdilated with a 6-mm balloon (Figure 5, Tacks marked with double arrows). Completion arteriography showed complete resolution of dissections with the restored unobstructed femoropopliteal flow (Figure 6). 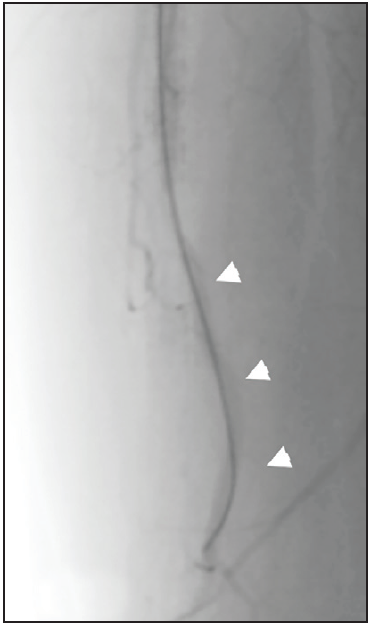 Figure 3. The lesion was crossed via contralateral retrograde access (arrows).

Recanalization of femoropopliteal CTOs frequently results in intentional or inadvertent subintimal wire passage that results in dissection planes either after spontaneous wire reentry or the use of reentry or “rendezvous” techniques (as was used in this case). However, depending on the actual plane of wire passage, these dissections are often discontinuous (ie, areas of dissection separated by patulous uninterrupted arterial segments). These dissections may be flow-limiting and compromise acute results, and all grades of dissection are associated with a higher incidence of late failure and restenosis.1 Although the placement of long-segment confluent stent scaffolds provides early resolution, long-term patency of most bare-metal stents is suboptimal,2 and the use of drug-eluting stents has recently been subject to controversy regarding late mortality risk.3 In our early experience, focal dissection repair using the Tack Endovascular System has the advantage of allowing targeted resolution of dissection areas with a low metal burden and vessel stress, because the Tack implants exert only low outward radial force through a dynamic range of vessel diameters.

IVUS can be a helpful adjunct for Tack-assisted optimized percutaneous transluminal angioplasty (oPTA) by showing the exact location of the dissection entry and exit, the arterial diameter (for best balloon selection), and the extent of the dissection. Because each Tack Endovascular System contains six Tack implants, Tacks can be individually and precisely deployed at needed sites and with uneven spacing.

Our workflow is to use IVUS and angiography to identify the entry and exit point as well as the length of dissections, then we mark these locations on the fluoroscopic monitor, and we deploy each Tack under high fluoroscopic magnification for targeted positioning and dissection repair with minimal Tacks. Should additional levels of dissection repair be needed, the process is repeated at high magnification with the image intensifier again centered over the region to be treated.

The oPTA strategy with Tack repair of dissections has been a particularly effective treatment approach in our office-based surgery lab. Early data suggest patency rates equivalent to other biomimetic stents and drug delivery technologies. As an alternative to drug-coated balloons (DCBs), oPTA with Tack deployment reliably resolves immediate postprocedural, dissection-related flow issues and provides a reimbursable, cost-judicious, and clinically reliable endovascular solution. In the TOBA II pivotal trial, primary patency at 1 year was 79.3% in a pooled population of 213 patients treated with either plain old balloon angioplasty or DCB, all of whom had post-PTA dissection (most of them severe).4 Also, the dynamic range of Tacks (3.5–6-mm diameter) allows us to treat more than one arterial segment with a single device.

In our practice, the use of oPTA with the Tack Endovascular System is a clinically effective strategy for treating patients with complex peripheral artery disease lesions. The ability to treat multiple levels with one device, reliably achieve angiographic success, and feel comfortable with evidence-based results has made oPTA the first-line technique in our office-based surgery lab.

Dr. Katsanos’s thoughts regarding the vascular community’s reaction to his group’s meta-analysis, the potential influence of follow-up and adjudication variables, non-SFA applications, and what comes next.

Ask the Experts: How Do You Define ‘High Risk for Restenosis’?