Atherosclerotic disease in the bifurcating femoral artery remains hostile anatomy for endovascular intervention. The angled ostia of the superficial femoral artery (SFA) and profunda make it difficult to place a stent without missing part of the target vessel circumference or jailing the other vessel. Even in friendlier territories, stenting can lead to inflammation and neointimal hyperplasia. Endovascular therapy in this area is largely composed of debulking and adjuvant balloon angioplasty.

For claudicants, durable patency decreases the risk of returning symptoms. For critical limb ischemia, restenosis is less of an issue. The aim is to restore adequate flow to allow wound healing with the expectation of repeat procedures, along with the notion that restenosis following nonimplant therapy is easier to treat than in-stent restenosis.

Dissections that arise from balloon angioplasty compromise clinical outcomes in both the short and long term. In the setting of limb salvage, dissection repair could be ideally achieved with a technique that allows for natural vessel movement and does not require high metal burden or complicate the potential for further treatment. The Tack Endovascular System® (Intact Vascular, Inc.) is a first-of-its-kind dissection repair device that offers the advantage of focal treatment with minimal metal, treating only the area where dissections are present and avoiding covering portions of healthy tissue (Figure 1). The device consists of an over-the-wire delivery system preloaded with six self-expanding nitinol implants that can be deployed to treat multiple dissections using a single catheter and leaving behind 70% to 81% less metal than stents.1

A 41-year-old man presented with a 1-year history of right calcaneal ulcer, another wound on the second toe on his right foot for the past 3 months, and severe claudication. His risk factors included a strong family history for premature coronary death; he was status post five-vessel coronary bypass. He also had a history of hypertension, hyperlipidemia, and type 2 diabetes mellitus.

Upon examination, femoral pulses were normal on the right and moderately diminished on the left. Duplex ultrasound suggested severe inflow and outflow disease. Both groins were prepped and draped, and right radial access was obtained for initial angiography. CO2 angiography demonstrated a patent distal aorta and bilateral iliac arteries.

The left common femoral artery had a 90% stenosis, and the right limb had a 70% stenosis at the bifurcation (Figure 2) with severe tibial disease. With the need for extensive revascularization, it was decided to stage therapy over multiple procedures.

Because of the significant disease in the right femoral artery, antegrade access was abandoned.

Selective angiography (Figure 3) and intravascular ultrasound images were obtained and showed a 70% to 80% stenosis composed of soft plaque, with 6-mm vessel diameter. Next, distal embolization protection was established in the mid-SFA, and directional atherectomy was used to debulk the distal common femoral artery. There was no visible dissection following atherectomy (Figure 4). Atherectomy was followed with angioplasty just across the bifurcation, using a standard balloon 1 mm smaller than the reference vessel diameter (5 X 40 mm). 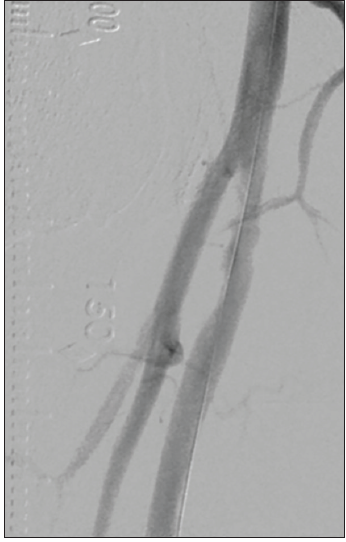 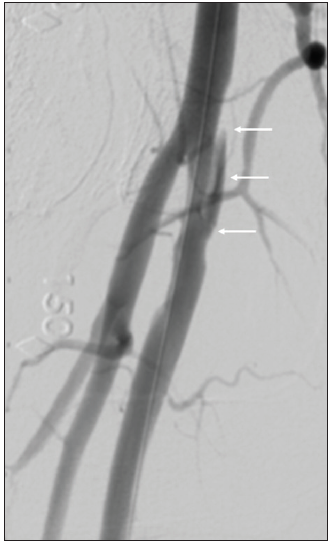 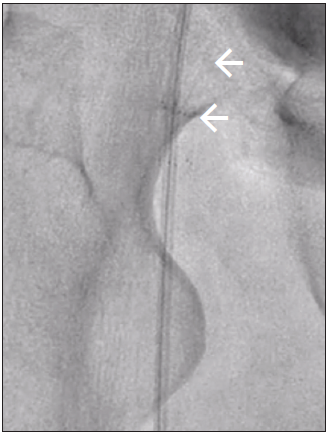 Figure 7. A 6-F sheath was successfully advanced through the Tacks (arrows) < 3 weeks later.

Despite the use of a smaller-diameter balloon, angiography post-percutaneous transluminal angioplasty revealed a 10-mm grade C–D dissection with visible extraluminal contrast and staining of the dissected false lumen (Figure 5).

Two Tack® implants were deployed precisely at the desired location and postdilated per the instructions for use. The final angiogram showed a pleasing result with the dissection flap firmly apposed to the vessel wall with brisk flow (Figure 6). The patient returned for tibial intervention < 3 weeks later. Antegrade access was used with a 6-F sheath advanced through the Tacks with no movement of the implants (Figure 7).

In our practice, the Tack Endovascular System is used to treat type C and more severe dissections. It is ideal for spot treating, and the delivery system is precise and easy to use. Our patients receive ideal results with the least amount of metal left behind.

Dr. Katsanos’s thoughts regarding the vascular community’s reaction to his group’s meta-analysis, the potential influence of follow-up and adjudication variables, non-SFA applications, and what comes next.

Ask the Experts: How Do You Define ‘High Risk for Restenosis’?