Immunotherapy and Checkpoint Inhibitors: A Primer for the Interventional Radiologist

The basics of immunology, immunotherapy, and checkpoint inhibitors. 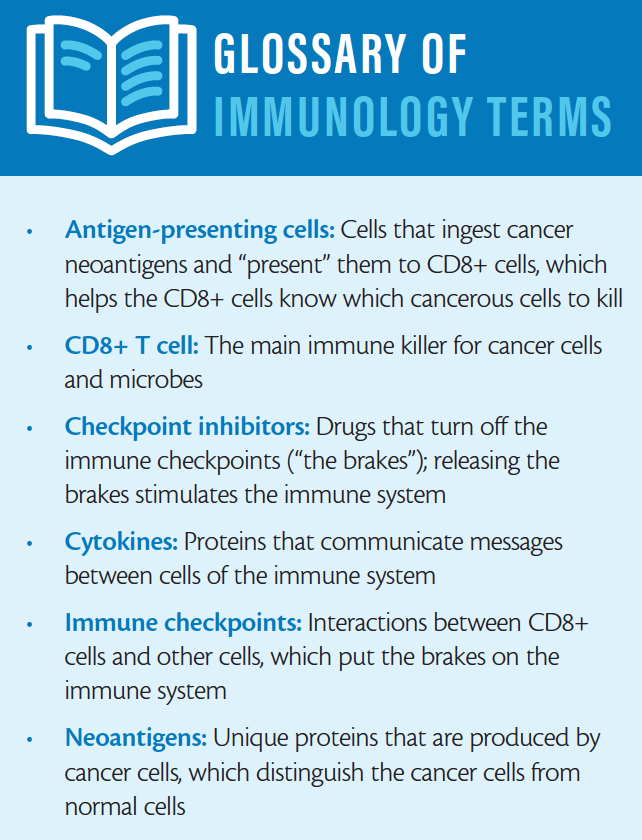 Interventional oncologists have successfully integrated into the clinical treatment algorithm for hepatobiliary oncology by learning about hepatic anatomy and physiology, chronic liver diseases, screening and imaging, systemic-targeted and antiviral therapies, surgical resection, and transplantation.4 To develop a role in the rapidly evolving field of immunotherapy, interventional oncologists need to learn about the immune system and how to manipulate it (see Glossary of Immunology Terms sidebar). This article reviews immunology relevant to interventional radiologists as well as introduces checkpoint inhibitors, which are a leading type of immunotherapy.

FIGHTING CANCER WITH THE IMMUNE SYSTEM

The immune system is a natural defense against both microbes and cancer. When we drain an abscess of pus (dead microbes and white blood cells), it is apparent that the cells of the immune system were working to eradicate the external invasion of foreign microbes. Less obviously, because all cancers manifest genetic and protein abnormalities, the immune system defends against the internal invasion of our normal tissues through a process called cancer immunoediting.5 In this process, the immune system exists in a state of constant vigilance, eliminating the occasionally mutated cancer cells by both cellular and humoral (antibody-based) mechanisms. When this equilibrium between cancer cell production and immune elimination is lost, cancer cells can escape the immune system and grow unchecked. The conventional pillars of oncology rely on external agents, including cytotoxic chemotherapies, scalpels, or x-rays, that act directly to remove or arrest the growth of cancerous tissues and cells. In contrast, the goal of immunotherapy is to initiate or reinstate the self-sustaining cycle of cancer immunoediting, allowing the immune-mediated removal of cancer cells to amplify and propagate. Of course, immune-mediated removal of cells must be controlled to avoid autoimmune responses.6 In this way, immunotherapy instructs, stimulates, and/or upregulates the innate and adaptive immune system to fight cancer.

To develop methods to stimulate the immune system to fight cancer, we need to try to understand the complex machinery of tumor immunology. Because tumor cells have abnormal genetics, they produce new mutated proteins with peptide sequences that have not been previously encountered by the immune system. Novel peptide sequences from cancer proteins that can allow the immune system to distinguish tumor cells from normal cells are called neoantigens.7 Neoantigens may be superficial on the cell surface; internal in the cytoplasm, nucleus, or organelles; or may be secreted. Dendritic cells (DCs), the most efficient type of antigen-presenting cells (APCs), can phagocytize abnormal tumor proteins that are subsequently processed by the DC.8 The DC matures and migrates, usually to a lymph node, where it displays the neoantigen to other cells of the immune system on the DC’s major histocompatibility complex (MHC; ie, human leukocyte antigen). Most importantly, the DC presents the cancer neoantigen to cytotoxic T lymphocytes (CTLs).9 CTLs, also known as T-killer cells, are distinguished by the presence of a surface marker called cluster of differentiation 8 (CD8+). The lymphocyte’s T-cell receptor (TCR) interacts with the MHC and tumor antigen, priming the CTL. Other costimulatory signals are exchanged between the DCs and helper T lymphocytes via interactions between specific surface receptors,10 allowing the CTL to become fully activated and effectively memorizing the antigen to destroy. The constellation of signal transductions results in activation of the CTL into a cellular assassin with an assigned mission and target. Clonal expansion of the activated CTL occurs in the lymph node.11

An unchecked activation of the immune system can cause autoimmune diseases, attacking antigens on normal cells that are not on tumor cells.14 Parallel to the activation of lymphocytes to become cytotoxic killers, other lymphocytes may be activated and trained to become regulatory lymphocytes (T-regs), which are assigned the task of protecting normal tissues by downregulating induction and proliferation of CTLs.15 However, overzealous regulation by T-regs may also blunt the immune response against real threats such as cancer.16

Despite a robust immune system capable of tracking newly formed invading cancer cells, cancers may avoid immune detection by a variety of mechanisms.17 Tumors can cloak tumor neoantigens or interfere with neoantigen processing and presentation, preventing DCs from gathering them and lymphocytes from learning to hunt them. Some cancers escape immune attack by producing chemicals called cytokines, such as transforming growth factor β or interleukin 10, that can directly deactivate CTLs or can recruit T-regs or myeloid-derived suppressor cells that can pacify, repel, or confuse CTLs. Some cancers, even after being recognized by an activated lymphocyte, can induce apoptosis of activated lymphocytes. Therefore, to optimally engage the immune system in this war against cancer, therapies must be developed that enhance the immune system’s antitumor surveillance while minimizing the tumor’s ability to evade the immune system.18

To avoid autoimmune disease, the body has a set of protein-protein interactions that serve as a set of checks and balances to control the type and magnitude of immune responses. These inhibitory interactions are called immune checkpoints, and drugs that disrupt these checkpoints are called checkpoint inhibitors.19 Checkpoint inhibitors “release the brakes” on the regulatory pathways that may inactivate CTLs, making CTLs more lethal. Of the dozens of checkpoints and pathways that have been identified, the first two checkpoints that have been successfully manipulated are the cytotoxic T-lymphocyte–associated protein 4 (CTLA-4) and the programmed cell death protein 1 (PD-1) and programmed cell death-ligand 1 (PD-L1) checkpoints. These are the checkpoints blocked by recently approved immunotherapy agents, which are discussed in the following sections.

During antigen presentation, an APC (such as a DC) presents a neoantigen on its MHC to a TCR on a CTL (Figure 1). This initial signal (called signal 1) causes the CTL to be primed but not yet fully activated to begin hunting cancer cells bearing the neoantigen. A second signal (called signal 2) between cell surface receptors on the APC and CTL must occur as part of a costimulatory cascade to result in complete activation of the CTL. One such interaction occurs between proteins of the B7 family (CD80 and CD86) on the APC, which interact with the CD28 of the CTL.20 In an example of an immune checkpoint, lymphocytes also produce the protein CTLA-4 that competes with CD28 to bind B7. Because CTLA-4 disrupts the CD28/B7 interaction, the CTL will not become activated, arresting the immune hunt. However, if a tumor has managed to escape immune surveillance, inhibiting the negative regulation of CTLA-4 (“releasing the brakes”) can jumpstart the immune system.21 The human-derived monoclonal antibody ipilimumab (Yervoy, Bristol-Myers Squibb) can bind to CTLA-4, allowing the CD28/B7 interaction to go unchecked, enhancing activation of the CTL (Figure 2). Thus, ipilimumab allows lymphocytes to stay activated and continue hunting tumor cells.

Figure 1. CTL priming, activation, and inactivation. To become primed, an APC must present an antigen on the MHC to the TCR, creating signal 1. Interaction between the checkpoint CTLA-4 and B7 create a negative signal that prevents activation. To achieve T cell activation, the negative CTLA-4/B7 interaction is disrupted via costimulation by the competitive CD28/B7 interaction (signal 2). T cells can become inactivated when PD-L1 on a cancer cells interact with the negative checkpoint molecule PD-1. Ag, neoantigen.

Melanoma is notorious for being an immunogenic cancer, and oncologists treating melanoma have been the early adopters of immunotherapeutic approaches. The benefits of ipilimumab were proven in a phase 3 trial of 676 patients with metastatic melanoma.22 In this pivotal trial, ipilimumab was tested against a cancer vaccine consisting of the tumor-associated antigen glycoprotein 100 (gp100) that is expressed in high amounts by melanomas. Median overall survival (OS) was 10 months for patients treated with ipilimumab compared with 6 months for gp100, resulting in a hazard ratio of 0.66 (P = .0026). Based on the results of the trial, ipilimumab was approved by the FDA for treatment of unresectable or metastatic melanoma. It costs approximately $30,000 per infusion or $120,000 total for an initial 12-week cycle.

Despite the potential durable mechanism of action in many cancers and the encouraging statistics, ipilimumab is rarely curative. By enhancing the number and function of activated lymphocytes, ipilimumab can cause severe toxicity,23 and the FDA issued a black box warning shortly after approval.24 In the warning, the FDA cautioned that ipilimumab “… can result in severe and fatal immune-mediated adverse reactions. These immune-mediated reactions may involve any organ system; however, the most common severe immune-mediated adverse reactions are enterocolitis (including perforation), hepatitis, dermatitis (including toxic epidermal necrolysis), neuropathy, and endocrinopathy.” The warning goes on to specify that some adverse reactions “occurred weeks to months after discontinuation” of ipilimumab. Reactions are typically treated by discontinuation of ipilimumab and administration of corticosteroids. Despite being powerful suppressors of lymphocytes, corticosteroid treatment of patients receiving ipilimumab for immune-related adverse events did not compromise OS or time to treatment failure.25

Another checkpoint that can deactivate cancer-hunting lymphocytes is the PD-1/PD-L1 checkpoint.26 Many normal cells exhibit PD-L1 on their cell surfaces, which can bind PD-1 of a primed or activated CTL to signal the lymphocyte to deactivate, disarming an errant attack on the normal cell. Many cancer cells also produce, or even overexpress, PD-L1, allowing them to masquerade as a normal cell and evade attack by activated lymphocytes.27 Inhibition of the PD-1/PD-L1 checkpoint helps to preserve the activation of the lymphocyte and thus the immune attack against cancer. Blockade of the checkpoint can be accomplished by tying up either the PD-1 or the PD-L1 protein.28 There are currently six products approved by the FDA that block the PD-1/PD-L1 checkpoint: three are PD-1 blockers (pembrolizumab, nivolumab, cemiplimab) and three are PD-L1 blockers (atezolizumab, avelumab, durvalumab).

Atezolizumab. Unlike pembrolizumab and nivolumab, which bind PD-1 on the lymphocyte, atezolizumab (Tecentriq, Genentech) binds the PD-L1 on the cell surface of tumor cells and tumor-infiltrating immune cells, the traitorous immune cells that paradoxically protect cancers, inhibiting the PD-1/PD-L1 checkpoint. In the pivotal single-arm trial of 315 patients with bladder cancer who had previously failed platinum therapy, ORR was 14.8%, with 5.5% achieving a complete response.38 Atezolizumab has also been associated with severe and fatal immune-mediated toxicity, including pneumonitis, hepatitis, colitis, and endocrinopathies.

Like the immune system, interventional oncology is adaptive and continues to change to meet the needs of our oncology patients. Decades ago, systemic cisplatinum and doxorubicin were found to be ineffective in improving OS in patients with hepatocellular carcinoma, but interventional radiologists devised methods of administration that resulted in significant survival benefit and wide clinical adoption. Likewise, external beam hepatic radiotherapy was found to cause prohibitively severe veno-occlusive disease and radiation-induced liver disease, but interventional radiologists devised methods to deliver radiation to liver tumors safely and effectively. Immunotherapy should not be viewed as a competitor to interventional oncology—it should be viewed as a new opportunity to apply interventional technology to the administration of new agents with new mechanisms of action. Immunotherapy is expanding our field, and we must learn to adopt and adapt to it to best suit our patients’ needs.