From a Patient’s Perspective: Multiple Views Focused on the Best Patient Care

Experts discuss challenges and concerns that dialysis patients face, decisions surrounding the type of vascular access, how to improve the dialysis patient’s experience, and the role of endoAVFs in patient satisfaction.

Dr. Alvarez: Vascular access is crucial for dialysis patients because it is their lifeline. Dialysis patients need an access that can handle high blood flow volume for delivering dialysis. One of the main challenges dialysis patients face is failure of their vascular access modality. A major barrier to increasing the usage of arteriovenous fistulas (AVFs) is the high failure rate, including their failure to mature to be used for dialysis. They are left with an alternative option of arteriovenous grafts (AVGs), which mature faster but require more frequent interventions. A central venous catheter (CVC) allows for immediate use but has an increased risk of infection that can lead to metastatic infections, such as osteomyelitis or endocarditis, which eventually increase morbidity and mortality.

Dr. Lok: A hemodialysis patient cannot undergo life-sustaining dialysis without a reliable connection between the dialysis machine and his or her body’s circulation: the vascular access. Interestingly, the biggest challenges patients face with their vascular access may not necessarily be the same as their biggest concerns. For example, a patient’s comorbidities and vessels may result in a fistula that is challenged to ever mature, yet the patient’s main concern may be their fear of cannulation pain or fistula disfigurement. The challenges with vascular access depend on many variables, including the type of vascular access a patient is considering or already has. For simplicity, AVFs and AVGs will be referred to as arteriovenous (AV) access, and CVCs will refer to tunneled hemodialysis catheters. Both vascular access challenges and patient concerns can then be broadly considered through the patient’s “vascular access journey” as before access creation, during creation, and after creation. A subset of key challenges according to vascular access type by phase of journey are listed in Table 1. 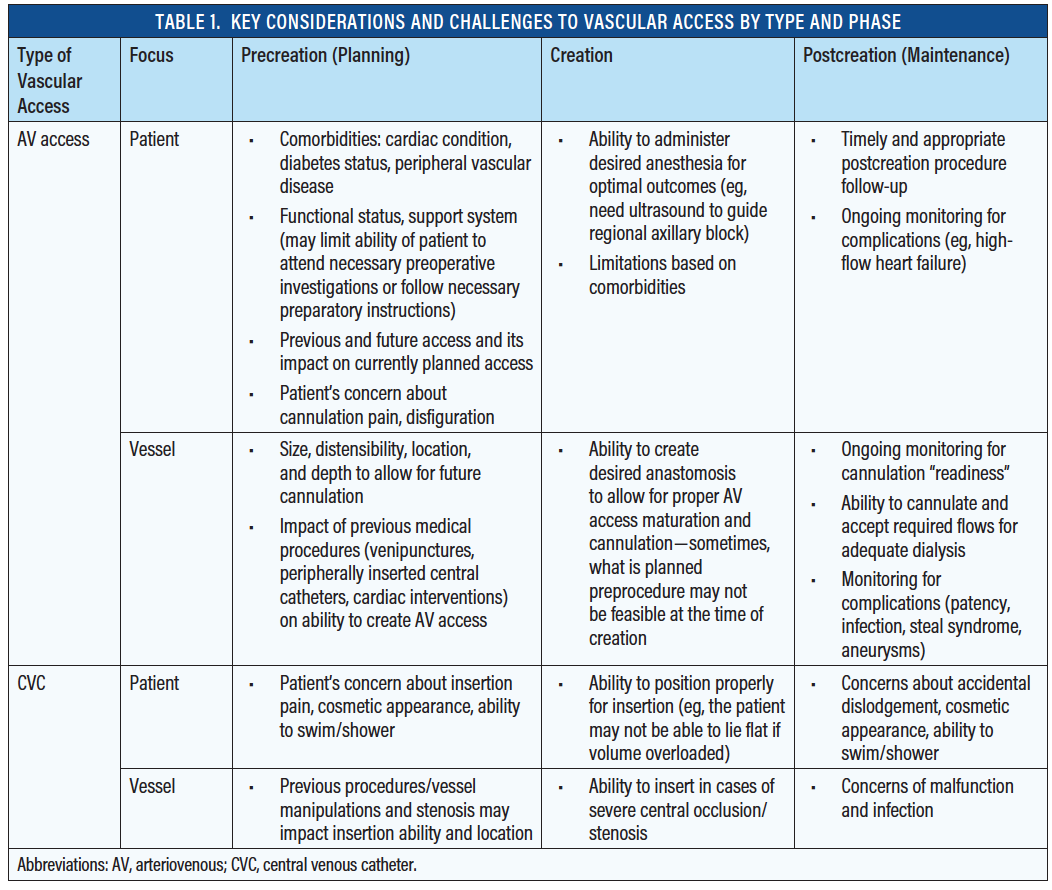 In your experience, how do you see your choice of vascular access benefiting patient experience?

Dr. Alvarez: Ideally, these patients should be referred when they have stage 4 chronic kidney disease. Then, the patients can plan the modality of dialysis and the kind of access. If the choice is hemodialysis, an access can be planned such that a hemodialysis catheter may be avoided in a majority of patients. If an AVF is created at this stage, it will allow ample time for the AVF to mature, as well as for assisting maturation percutaneously (if needed) and exploring the possibility of surgical revision or conversion to an AVG. Ideally, the access can be tailored to the specific needs of the individual patient. Some patients may be candidates for a fistula as primary access and others for an AVG or catheter.

Dr. Lok: My choice of vascular access would take into consideration the current feasibility and future access needs. This considers patient and vessel characteristics, the patient’s history and end-stage kidney disease life plan,1 and local resources. Importantly, my choice aims to align with the patient’s own wishes and dialysis goals. Doing so will hopefully improve patient experience, which directly impacts patient satisfaction.

Why are patient approval measures one of the most important factors to consider when treating dialysis patients?

Dr. Alvarez: Hemodialysis patients go to dialysis three times a week. If you can provide them with an access that minimizes the times they have to come for an intervention, then this will contribute to their satisfaction. It is important to remember that their life does not revolve around dialysis. They also see their primary doctor and other subspecialists regularly, and they still need personal time for their family and work. It is our responsibility as caregivers to guide them to choose a dialysis modality and access that will best accommodate their daily routine with minimal disruption.

Why is extending the time between reinterventions important to a dialysis patient?

Dr. Alvarez: Of all stakeholders, the patient is most important. If we decrease the number of interventions, it will mean more time for family or work and translates to better patient satisfaction.

Dr. Lok: As mentioned previously, the rate of interventions is a measure of vascular access function and a primary concern for patients. Any time free from interventions means more time not in traffic, not in a waiting room, not sedated, and not in pain. It’s similar to the longer the time away from the dentist, the better! It means more time to do what the patient really wants.

What role do you think endovascular AVF (endoAVF) creation could play in reducing catheter incidence?

Dr. Alvarez: I think endoAVFs could reduce the incidence of catheters. The technique itself broadens the number of potential providers who can create fistulas. Currently, mainly surgeons create surgical AVFs. In theory, if the number of physicians capable of creating AVFs increases, the time from consult and screening to creation and maturation should decrease.

The endoAVF technique lends itself to potential same-day creation. With adequate expertise, this technique allows for same-day creation just like with any other endovascular intervention for AV access. The patient could potentially arrive in the morning for initial consult, be screened with ultrasound, and if the patient is a candidate, the endoAVF could be created that same day under conscious sedation. EndoAVFs can make things more efficient for patients without compromising quality.

Dr. Lok: I do think an endoAVF can reduce catheter incidence, especially in incident dialysis patients. There are many benefits to this, including not exposing patients to the associated risks of catheter-related complications, inconvenience, and costs. Furthermore, data suggest that patients who have a fistula without previous ipsilateral catheters have superior fistula survival. Overall, I think this adds positively to overall patient experience.

Do you think that an endoAVF procedure affects the appearance of a patient’s vascular access, and could this affect overall patient satisfaction?

Dr. Alvarez: Appearance is just as important to patients with renal disease as it is for anyone else. With my patients, it appears that disfigurement due to aneurysmal degeneration is less with endoAVF. One of the most appealing aspects of the procedure is the absence of a surgical scar. As an example, one of our young patients had a family history of kidney disease; his father received dialysis toward the end of his life. The patient refused a surgical AVF because his dad had large disfiguring “bumps.” When endoAVF was offered as an option, he moved forward with the procedure. He loves it and is currently catheter free. This technology has been a game changer for our patients. In fact, word of mouth has led to some patients asking their primary nephrologist for referral to be evaluated and screened for endoAVF.

Dr. Lok: Early experience with the endoAVF appears promising with regard to its appearance—but longer time will tell. Given the distribution of flow, the procedure may contribute to the cosmetic appearance. Therefore, if patients are happy with the appearance of their endoAVF, it would contribute to their satisfaction.