The Evolution of Covered Stents

Arteriovenous (AV) access is the lifeline for patients with end-stage renal disease who require chronic hemodialysis. Today, there are nearly 500,000 people with end-stage renal disease in the United States and many thousands more throughout the world who undergo hemodialysis, most of whom dialyze with either an AV graft (AVG) or AV fistula (AVF).1,2 However, these permanent dialysis access circuits are fraught with problems, particularly the development of flow-limiting stenosis. Dialysis access stenosis reduces dialysis efficiency and can cause secondary dialysis circuit complications, such as bleeding, aneurysms, and pseudoaneurysms. In some cases, stenosis can lead to access circuit thrombosis, necessitating urgent declotting, or abandonment with central venous catheter placement when declotting cannot be achieved.

Percutaneous transluminal angioplasty (PTA) has been the mainstay for treating stenosis in AVGs and AVFs. Dialysis access PTA, first described by Glanz et al in 1984,3 is still widely used to treat stenosis. It is usually performed as an outpatient procedure and is easily arranged, safe, and technically effective in treating stenosis so that the patient can return to dialysis with good AVG or AVF function. However, recurrence of stenosis at the PTA site is frequent, necessitating repeated PTA.

In the early 1990s, there was hope that adding a bare-metal stent (BMS) at the time of PTA would confer better post-PTA patency. There have been only three truly randomized studies comparing PTA with PTA plus a BMS, and the results indicated no clear patency advantage when a BMS was added.4-6 Therefore, a BMS does not improve patency if PTA has been technically successful and is only recommended for bailout of technically failed PTA.7

The concept that a stent covered with graft material could prevent or limit the development of restenotic tissue evolved over the ensuing years. There were several areas where post-PTA restenosis was frequently encountered, including coronary artery and peripheral artery interventions, transjugular intrahepatic portosystemic shunts, and dialysis access circuit interventions. Covered stents have limited use in the coronary arteries and are prone to thrombosis.11 In the peripheral arteries, aortoiliac and femoropopliteal covered stents have been adopted. However, in both the coronary and peripheral arteries, inhibition of restenosis is now often managed with pharmacologic approaches such as drug-eluting stents and drug-coated balloons. Yet, covered stents remain the mainstay for preventing restenosis in transjugular intrahepatic portosystemic shunts and dialysis access circuits.

The FLAIR® and FLUENCY® PLUS Endovascular Stent Grafts

In the late 1990s, covered stents seemed to be a viable approach to limit post-PTA restenosis in AV access circuits. Based on healing properties with different materials and designs, prototype devices were developed and tested by the collaborative efforts at Impra, Inc. and AngioMed GmbH & Co., which were both acquired by C.R. Bard, Inc., now Becton, Dickinson and Company. This work resulted in the first commercially available AV access covered stent in United States, called the FLAIR® Endovascular Stent Graft (BD). Designed on a self-expanding nitinol stent embedded in a fused internal-external barrier layer of expanded polytetrafluoroethylene (ePTFE), the FLAIR® Stent Graft was specifically developed to treat stenosis at the venous end of an AVG, where recurrent post-PTA restenosis was often seen. One novel attribute of the FLAIR® Stent Graft was the option to select either a tubular or flared configuration depending on the size of the outflow vein. The flared device has a downstream diameter that is 4 mm larger than the rest of the device. This larger flared end of the stent graft was a better match for the size of the outflow veins, which permitted optimized flow patterns that could lead to decreased neointimal hyperplasia formation.

An additional advantage that wasn’t recognized during the design of the flared FLAIR® Stent Graft is its ability to support more laminar flow with fewer flow disturbances within the venous outflow, as compared with the straight configuration in the same condition where the outflow vein has a larger diameter than the AVG. As the diameter of the device increases, so does the cross-sectional area, and therefore the velocity of blood flow entering the vein diminishes. Simulated flow models have shown that the typical tubular end-to-side vein/graft anastomosis produces turbulence at the anastomosis, whereas placement of a flared FLAIR® Stent Graft at the anastomosis allows for more laminar flow into the outflow vein.16 Turbulent flow has been associated with the development of neointimal stenosis, whereas laminar flow is believed to reduce hyperplastic tissue proliferation and may reduce the development of restenosis.

The FLAIR pivotal trial and the subsequent RENOVA postmarket trial demonstrated clinical benefit using the FLAIR® Stent Graft to treat AVG venous anastomotic stenosis. Both trials showed superior treatment site patency and AVG circuit patency compared with PTA alone at 6 months.17,18 The FLAIR® Stent Graft was approved by the FDA in 2007 for use in the treatment of stenoses at the venous anastomosis of ePTFE or other synthetic AVGs.

Although these stent grafts are superior to PTA for their indicated applications, both the FLAIR® Stent Graft and FLUENCY® PLUS Stent Graft have been in clinical use for more than 10 years without much change. Meanwhile, today’s requirements for dialysis circuit intervention have evolved. Whereas the FLAIR® Stent Graft was developed for AVG use, the impact of the Fistula First Breakthrough Initiative has led to fewer AVGs and many more AVFs. Furthermore, with recognition that BMSs do not afford better outcomes than PTA, fewer BMSs are seen in AV circuits, and there is a decreased need for the FLUENCY® PLUS Stent Graft to treat in-stent restenosis. What is needed at this time is a flexible covered stent with a broad sizing matrix that can be accurately delivered to treat not only stenosis in AVGs but also in AVFs.

The COVERA™ Vascular Covered Stent has been approved by the FDA for use in AVGs and AVFs based on data from the ongoing AVeVA and AVeNEW clinical trials. The AVeVA trial is a single-arm nonrandomized clinical study that evaluated the COVERA™ Vascular Covered Stent for treatment of AVG venous outflow stenosis.21 The 6-month results exceeded the predicted patency goal of 40% at 6 months with a treatment site patency of 71%, which was better than results from both the FLAIR pivotal and RENOVA clinical trials. AVeVA has completed its 12-month data review and will soon complete 24-month follow-up data. 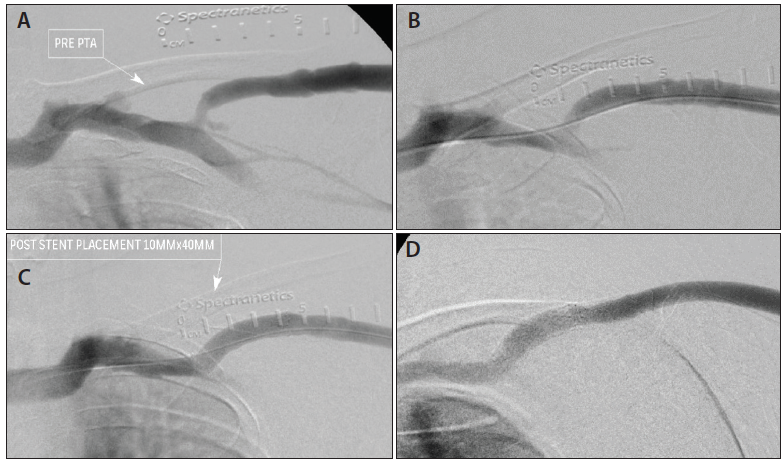 Covered stents have consistently improved the results of PTA for treating hemodialysis access circuit stenosis. For more than 10 years, BD/Bard has advanced the science of covered stents. Three different covered stents have been developed, tested, and proven in human clinical trials: the FLAIR® Stent Graft, FLUENCY® PLUS Stent Graft, and now the COVERA™ Vascular Covered Stent. With recent compelling clinical trial data and FDA approval, the COVERA™ Vascular Covered Stent can be used to treat stenosis in both AVGs and AVFs.

19. Falk A, Maya ID, Yevzlin AS, and RESCUE Investigators. A prospective, randomized study of an expanded polytetrafluoroethylene stent graft versus balloon angioplasty for in-stent restenosis in arteriovenous grafts and fistulae: two-year results of the RESCUE study. J Vasc Interv Radiol. 2016;27:1465-1476.