Update on Treatment of Cancer-Associated Thrombosis

Venous thromboembolism (VTE), which includes deep vein thrombosis (DVT) and pulmonary embolism (PE), is frequently diagnosed in patients with cancer. Tumor cells may activate blood coagulation by releasing proinflammatory and proangiogenic cytokines and directly interacting with the host endothelial cells, leukocytes, and platelets. The overall incidence rate of cancer-associated thrombosis (CAT) is approximately 12.6 per 1,000 person-years, but the annual incidence may be as high as 20% depending on the tumor site and other associated risk factors (eg, central venous catheters, prior history of VTE). VTE is associated with a two- to sixfold increased risk of mortality in patients with cancer and often affects ongoing cancer-related treatments, including delay or discontinuation of chemotherapy. VTE is the second leading cause of death in patients with cancer.1

Low-Molecular-Weight Heparin as Standard of Care

Low-molecular-weight heparin (LMWH) treatment is associated with similar or lower rates of VTE recurrence and bleeding relative to VKAs in patients with CAT, does not rely on gastrointestinal absorption, and interacts minimally with chemotherapy agents. Therefore, LMWH is recommended by current guidelines as first-line treatment for short- and long-term management of CAT.2 The recommended duration of treatment with LMWH should be at least 3 to 6 months. The decision to continue anticoagulation beyond the initial 6 months for secondary prevention of recurrent CAT should be made on a case-by-case basis after assessing the risk of recurrent VTE and major bleeding in combination with patient preference. In instances of VTE recurrence on anticoagulation, the LMWH dose may be increased by 20% to 33% to reduce thrombotic events without a concomitant increase in bleeding complications.1 Despite clinical consensus, LMWH treatment of CAT is underused relative to clinical guideline recommendations. Due in part to patient preference, convenience, and cost, patients with CAT have higher anticoagulation interruption and discontinuation rates than patients with other VTE risk factors.3

Direct Oral Anticoagulants as an Alternative to LMWH

Direct oral anticoagulants (DOACs), including direct thrombin inhibitors (dabigatran) and direct factor Xa inhibitors (rivaroxaban, apixaban, edoxaban, betrixaban), have advantages relative to VKAs such as a fixed-dose regimen, predictable pharmacology and anticoagulation, and no need for regular laboratory monitoring. Unlike LMWH, DOACs are orally administered and do not require long-term subcutaneous injections, which may be barriers to regular LMWH treatment. Results from three randomized controlled trials comparing apixaban, edoxaban, and rivaroxaban with dalteparin have been published within the past year.4-6 These trials showed that use of DOACs tended to reduce the risk of recurrent VTE but increased the risk of major and clinically relevant nonmajor bleeding events (Table 1).4-6 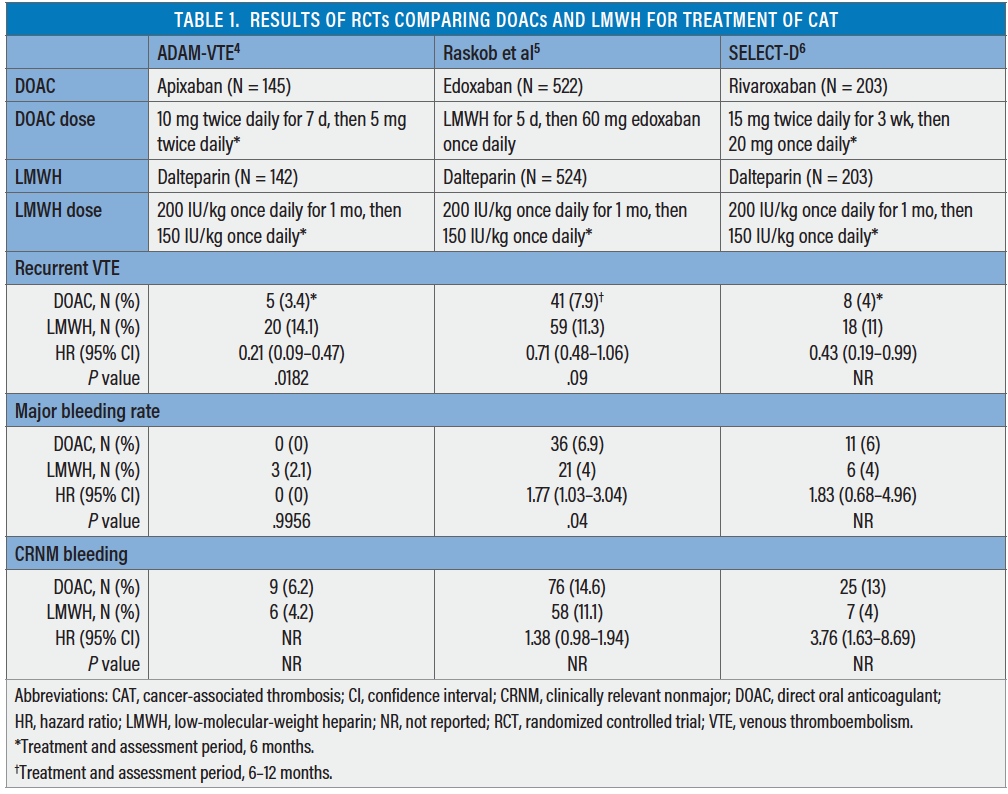 These studies concluded that the use of DOACs was either superior4,6 or noninferior5 to LMWH for preventing secondary thrombotic events, had a low risk of bleeding, and was associated with superior quality-of-life outcome measures. Therefore, clinical guidelines may be updated in the near future to allow the use of DOACs for treatment of CAT.

Endovascular procedures that may be helpful in the setting of CAT are the same as those for patients without cancer. Possible interventions include placement and retrieval of IVC filters; interventions for iliofemoral DVT, PE, and caval thrombosis; and stenting for symptomatic venous obstruction. Patient evaluation for an endovascular procedure (typically in conjunction with systemic anticoagulation) should include severity of symptoms, severity of underlying illness, comorbidities, life expectancy, and overall assessment of procedure risks versus benefits.

The use of IVC filters may be justified for patients with CAT who have a contraindication to anticoagulation, such as recent bleeding, recent major surgery, tumors at high risk for hemorrhage (eg, central nervous system lesions), and in the perioperative period. IVC filters could also be offered to patients with cancer without a history of VTE who are scheduled to undergo surgical procedures associated with a high risk of VTE, such as brain, spine, and orthopedic procedures. Filters may be used in the setting of recurrent VTE despite anticoagulation (failure of anticoagulation), as well as for patients on anticoagulation who are at risk for cardiopulmonary decompensation in the event of clot dislodgement. This group may include patients with VTE and ongoing respiratory compromise and patients with a free-floating thrombus. Lastly, some practitioners advocate the use of IVC filters as a protective measure against PE at the time of CDT for DVT.

The risk of VTE recurrence for patients with CAT who have had an IVC filter placed may be as high as 32%.7 This finding raises the question of whether IVC filters prevent PE in this high-risk population or promote thrombus formation around the device. The FDA strongly recommends IVC filter removal when it is safe to resume anticoagulation. Nevertheless, inserting permanent IVC filters may be considered for patients with CAT who are at lifelong risk of thrombosis and for whom anticoagulation is unsafe.

Pharmacomechanical thrombectomy may be indicated for patients with CAT who present with iliofemoral DVT and moderate to severe symptoms or in the setting of phlegmasia cerulea dolens. Catheter-directed therapy and other treatment measures may prevent development of postthrombotic syndrome (PTS), which is characterized by extremity swelling, pain, varicose veins, hyperpigmentation, and ulcer formation. The prevalence of PTS after symptomatic DVT has been reported at 27% to 84%. The risk of PTS is highest for patients with proximal (iliac or proximal femoral) DVT.8

Options for catheter-directed therapy include CDT, pharmacomechanical clot maceration, and aspiration thrombectomy. If there is associated extrinsic compression by the tumor or lymphadenopathy or a component of chronic organized thrombus that cannot be cleared by pharmacomechanical measures, stenting may be indicated (Figure 1). There are limited data on CDT for patients with CAT. One retrospective study demonstrated that patients with and without cancer who underwent CDT for proximal DVT had a similar rate of clot lysis (66.7% vs 64.6%), bleeding complications (4.9% vs 3.4%), and PE (1.6% vs 1.7%).9 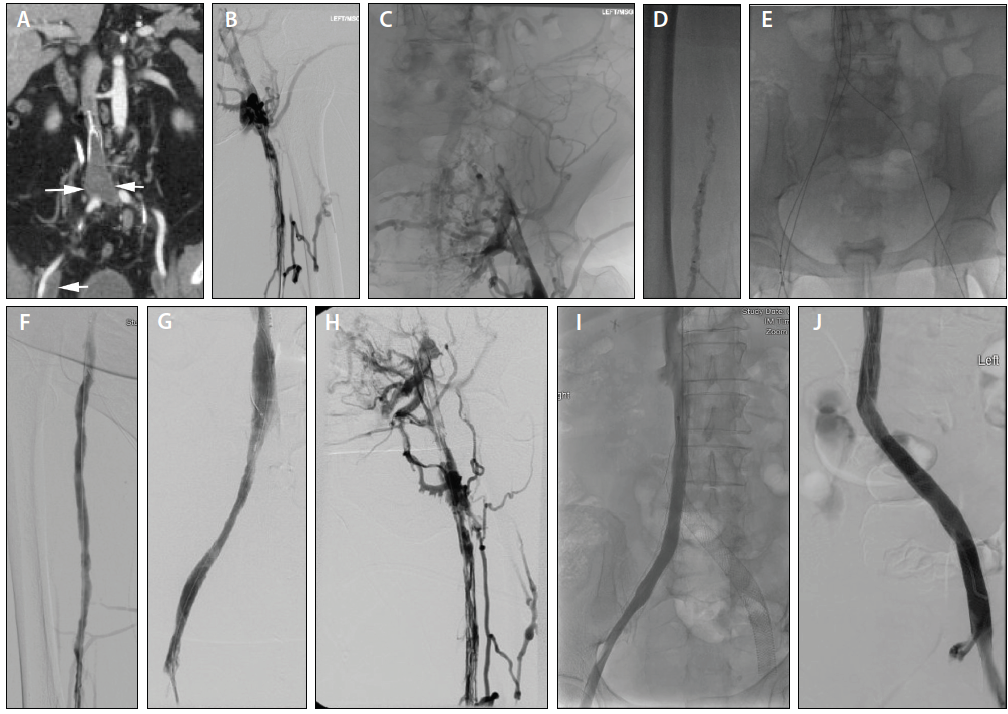 Asymptomatic subsegmental PE identified on routine CT examinations performed for staging or treatment follow-up may not warrant either anticoagulation or endovascular treatment.1 Endovascular therapy may be warranted in the setting of symptomatic PE with large clot burden after consideration of life expectancy, severity of underlying illness, and comorbidities. Radiographic evidence of high clot burden is not an indication for endovascular treatment in and of itself. PE severity should be assessed clinically for patients being considered for endovascular treatment. High-risk or massive PE is defined as presence of shock (systolic blood pressure < 90 mm Hg for 15 minutes or need for inotropic support, pulselessness, heart rate < 40 bpm with shock). Patients with intermediate risk or submassive PE with right ventricular strain have a characteristic appearance of cardiac chambers on CT and echocardiography as well as elevation of brain natriuretic peptide and/or troponin levels.10 Possible interventions for high- and intermediate-risk PE may include mechanical fragmentation with devices such as the Indigo CAT8 XTorq (Penumbra, Inc.), FlowTriever (Inari Medical), or AngioVac (AngioDynamics) and/or CDT (without or with ultrasound enhancement [Ekos, Boston Scientific Corporation]). CDT may be adequate for patients with submassive PE and could be used after mechanical fragmentation for massive PE. During CDT, tissue plasminogen activator is delivered into one or both pulmonary arteries via separate access sites at the dose of 1 to 2 mg/hour for 24 to 48 hours. Unfractionated heparin is given at 500 units/hour via the venous access sheath. Measurable short-term outcomes of CDT for PE include assessment of right ventricular/left ventricular diameter ratio by bedside echocardiography, mean pulmonary artery pressure measurement, assessment of cardiac index, and monitoring for bleeding events. Documented improvement of oxygenation, hemodynamics, and echocardiogram may obviate the need for repeat pulmonary angiography after CDT for PE.

Obstruction of the superior vena cava (SVC) either by clot or due to extrinsic compression by tumor may result in arm, neck, and face edema; headache; laryngeal edema; and orthopnea. This constellation of findings is referred to as SVC syndrome. IVC obstruction by clot or compression by tumor presents as IVC syndrome with signs including lower extremity edema, genital edema, abdominal wall swelling, and ascites. Caval thrombosis may be managed with the help of clot aspiration devices, such as AngioVac (Figure 2). The use of self-expanding stents has been established for relief of caval obstruction caused by malignant tumors (Figure 3 and Figure 4). A recently published study showed that stenting of malignant SVC or IVC obstruction resulted in significant symptomatic improvement when compared with other standard treatment measures, including anticoagulation, diuretics, chemotherapy, and external beam radiation.11

Figure 2. Multifocal IVC thrombosis in a 72-year-old man with metastatic colon cancer and severe bilateral leg edema diagnosed by CT (arrows) (A) and confirmed by venography (B, C). There was significant improvement of flow (D) through the IVC after suction thrombectomy using the AngioVac device with residual thrombus (arrows) seen in the intrahepatic portion of the IVC.

Figure 3. Contrast study through a malfunctioning port was requested for a 72-year-old woman with breast cancer. The study showed near-complete occlusion of the SVC (arrows) (A), which was found to be due to compression by tumor on same-day CT (B). The patient developed respiratory failure within 24 hours. Laryngeal edema was noted at the time of intubation. Repeat venogram (C) showed complete SVC occlusion. Blood flow through the SVC was restored (D) after placement of a Wallstent (Boston Scientific Corporation). 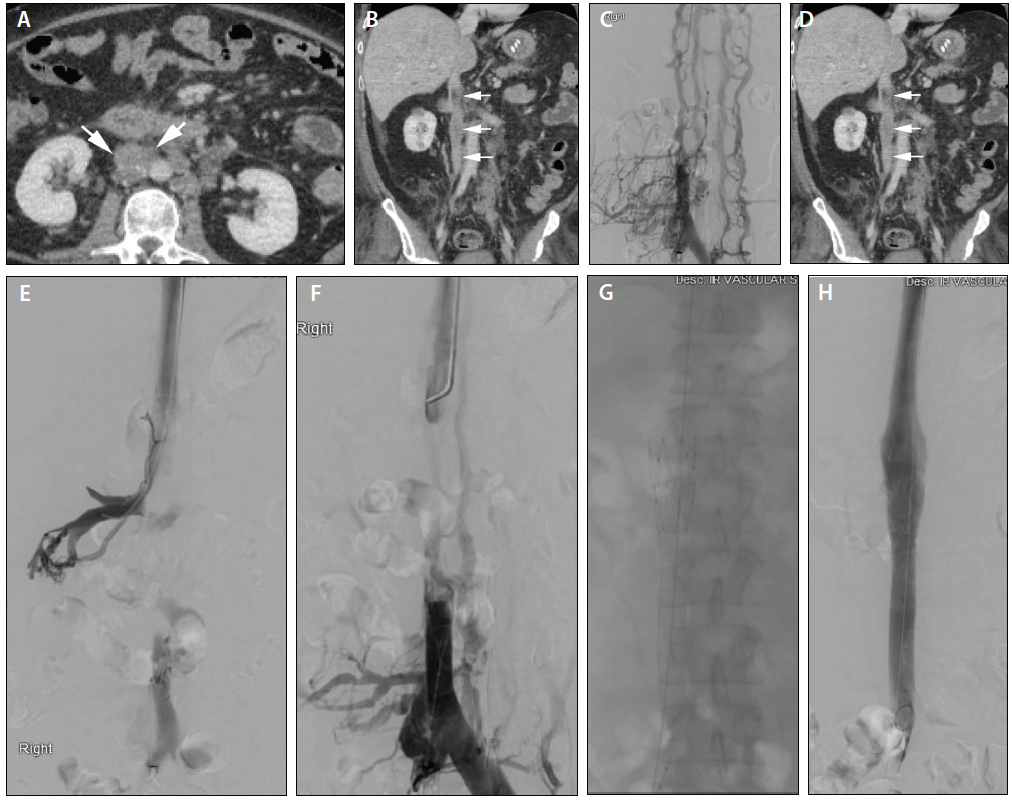 Figure 4. Severe IVC narrowing that extended above the level of the renal veins in a 68-year-old man with metastatic sarcoma and disabling lower extremity edema, as shown on axial CT (A) and coronal reformatted CT (B). Venograms from the right internal jugular and left femoral approaches showed the cranial and caudal extent of IVC obstruction in relation to the patent right renal vein that was directly catheterized (C). Extensive retroperitoneal collaterals were evident (D, E). The infrarenal IVC occlusion was treated by deploying overlapping Wallstents (F). A Gianturco Z-stent (Cook Medical) with large interstices was deployed across the renal vein ostia (G) for the juxtarenal component to prevent renal vein thrombosis. Stenting resulted in restoration of flow through the IVC and resolution of leg edema (H).

Recanalization of the SVC and preservation of upper body venous access sites for future systemic therapy may be possible for patients with catheter-related central venous obstruction or extrinsic compression by malignant tumors. Anton et al described a method for SVC revascularization and stenting with subsequent port placement during the same treatment session in a series of 31 patients.12 Revascularization and port placement were technically successful for all patients. In-stent stenosis developed among two of 18 (11%) patients with available imaging follow-up and was successfully treated with balloon angioplasty.